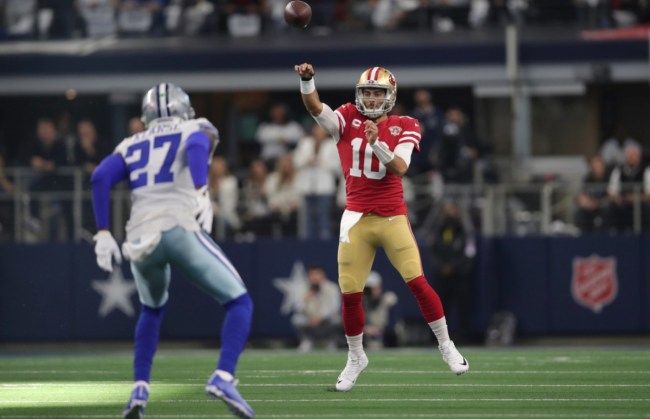 Jimmy Garoppolo has spent much of his football career beating the odds. He was a 2 star recruit coming out of high school and ended up playing college football at Eastern Illinois. His freshman year, they finished 2-9.

By the time he left, he had won 2 OVC Championships, led the team to the FCS Playoff twice, thrown for over 5000 yards in a season, and won the Walter Payton Award. Then he was drafted as a potential replacement for the greatest Qb in NFL history.

That didn’t work out so well. Tom Brady never slowed down and Jimmy G was just stuck behind him, so the Patriots traded him. Unfortunately, they traded him to a 49ers team that was 1-10 by the time he took over. They won his first 5 games.

The next season he tore his ACL early in the year. The 9ers won 4 games that year. Garoppolo came back from that injury and got them all the way to the Super Bowl.

After all of that, it should come as no surprise that Jimmy Garoppolo is pretty comfortable as an underdog. What most people don’t realize is he is historically good as an underdog.

That has to worry Packers fans a little bit. Jimmy Garoppolo has the best winning percentage in league history as an underdog. Tonight, the 49ers are a 5.5 point underdog against the Packers. The 9ers already won one game this postseason as an underdog when they took out the Dallas Cowboys last weekend.

If Jimmy Garoppolo continues the trend tonight, the 49ers will become just the second 6-seed to make it to the Conference Championship round in the last decade.