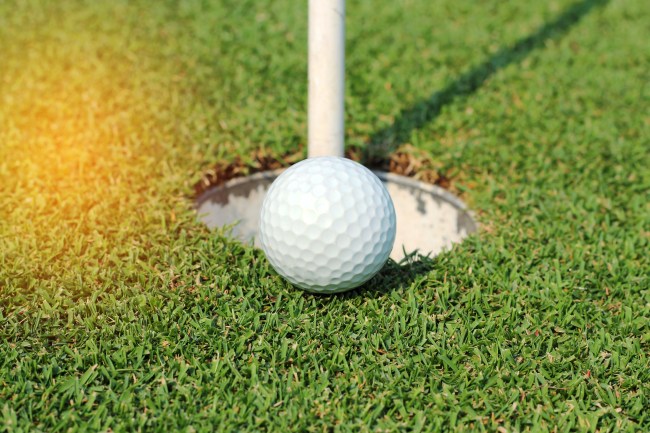 Hole-in-one stories usually only go one of two ways. Either the player hit a fantastic shot and was rewarded for hitting it in a perfect spot or the player got lucky, there really isn’t any in-between.

For me, personally, my only hole-in-one came in high school and I 100% caught the shot thin. It was honestly a miracle that the ball stayed in the cup after hammering the flagstick, but hey, everyone gets lucky every once and a while.

My story of thinning my way to a hole-in-one has absolutely nothing on Allison Koehnke’s, though.

Koehnke is a 36-year-old mother of two from Oregon who “plays about six holes a week for giggles with her girlfriends.” Koehnke, her husband, and another couple decided to take a trip to Bandon Dunes to check out the recently opened Sheep Ranch for what would be Mrs. Koehnke’s first full round of golf all year.

She decided to have some fun on the 102-yard Par 3 16th hole and hit putter off the tee. After striking her putter like a punch-wedge, it rolled onto the green and actually hit off the ball of one of her playing partners and rolled into the cup.

Koehnke, again, in her first round of the year, made a hole-in-one with a putter at Sheep Ranch, a course on every golfer’s bucket list, and got it all on video.

Tracked down this woman who made an ace with her PUTTER at Bandon Dunes’ Sheep Ranch, as first shared by ⁦@NoLayingUp⁩. She’s got quite the story to tell! That her husband got it on video is priceless. pic.twitter.com/3TSsbb8MAS

Golf, what a game.

Ace with her putter ⁦@BandonDunesGolf⁩ Sheep Ranch and the deservedly joyous walk to the sweet ball retrieval from cup. pic.twitter.com/jrOBLM3kT9

According to Golf Digest, Koehnke’s caddie, Graham, encouraged her to use putter on the tee given the yardage and the insane amount of wind that day. In the long run, it was a pretty solid call by Graham.