Does A Win Over Holly Holm At UFC 239 Prove Amanda Nunes Is The Greatest Of All Time? Maybe She Already Is? 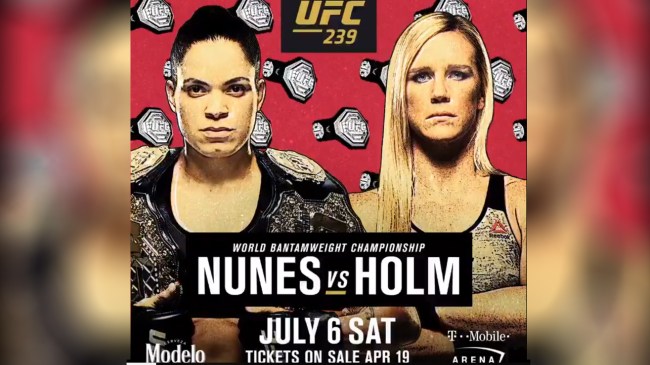 Coming up on the three year anniversary of the night she first won the title with a blistering performance at UFC 200, Nunes has slowly compiled one of the most impressive resumes in all of mixed martial arts. She’s fought on the biggest cards and beat some of the most popular fighters of all time. And, with two championship belts already in her possession heading into her UFC 239 co-main event bout against Holly Holm, it’s time to consider Nunes as the great woman to ever step foot inside the Octagon.

But how did we even get here?

Having already lost three fights before she made it to the UFC, Nunes suffered an absolutely brutal defeat at the elbows of Cat Zingano back at UFC 178. The year was 2014, the month was September, and no one could have predicted the run that Nunes was about to go on.

Picking up a couple of wins in 2015, Nunes managed to score a slot on the mega UFC 196 main card, you know the one headlined by Nate Diaz choking out Conor McGregor. Eeking out a win over current flyweight champion Valentina Shevchenko, Nunes called for a title shot against Miesha Tate, and “The Lioness” not only got her wish, but she made the most of it, needing just 3:16 to shatter Tate’s nose and claim the title.

It was a pretty, pretty, pretty huge victory on account of the sheer dominance. The win was even bigger considering that Nunes headlined a card over legends like Brock Lesnar, Anderson Silva, Daniel Cormier, Jose Aldo, and Cain Velasquez.

Maybe it was because the fanbase adored Miesha, or maybe because it was tough to relate to Nunes early on in her championship reign, but “The Lioness” had some difficulty catching on at first. Perhaps it’s because the UFC continued to book her against beloved former champions.

For her part, Nunes really didn’t care. She had no problem silencing the 20,000 in attendance at UFC 207 when she completely obliterated “Rowdy” Ronda Rousey in just 48 seconds. With the T-Mobile Arena packed with young girls hoping to witness the miraculous comeback of cult hero Rousey, Nunes faced boos and taunts on her way to the Octagon. Nothing shook her focus though, and Nunes obliterated Rousey, straight annihilation time style.

In the years that have past, Nunes has protected to her legacy at bantamweight, and grown her legend with a title win at featherweight over the previously indestructible Cris “Cyborg” Justino. The win over “Cyborg” may have actually been the best of her career, needing all of 51 seconds to smoke Justino with an overhand right.

Actually, Nunes dropped “Cyborg” three times in under a minute, delivering a fearless and flawless performance, so why is there really any doubt that she’s absolutely the greatest woman to ever fight MMA? Why does this question even exist ahead of her fight against Holm on the UFC 239 Pay Per View main card on ESPN+?

Part of it comes down to selling a fight, but there’s also the possibility that Holm can pull out the win and make her own claim.

Examining the parallels between the two, Nunes and Holm are the only two women to have ever beaten Ronda Rousey inside the Octagon, but the way they each finished “Rowdy” is quite indicative of each fighter’s style.

Of the two, Holm is the more technical, patient, and methodical fighter, whereas Nunes is a straight shotgun of power going full blast into the line of fire.

Relying on her kickboxing, Holm is more prone to a point fighting style, which has hurt her in the past, in particular in fights against Shevchenko and Cyborg, when she dropped decisions partly on account of a lack of activity. Nunes has never had an issue with inactivity, as Shevchenko is the only fighter to have made it to the final bell with “The Lioness” inside the Octagon.

Actually, after examining Nunes’ career, it’s really clear that she is, in fact, the women’s MMA G.O.A.T. She’s beaten four current or former UFC champs, tied former strawweight champion Joanna Jedrzejczyk with a UFC women’s record eight-straight wins inside the Octagon, and earned the finish in eight of her 10 UFC wins.

Those are absolutely startling numbers and make it easy to overlook a single loss, especially in mixed martial arts, where losses mean far less than in a sport like boxing.

So take some time out to recognize greatness and tune in to the UFC 239 Pay Per View Main card on ESPN+ to witness Amanda Nunes’ next act, which will undoubtedly solidify her as the baddest woman to ever do the whole MMA thing.