Hornets Fans Lose It Over James Bouknight Getting Arrested Yet Again 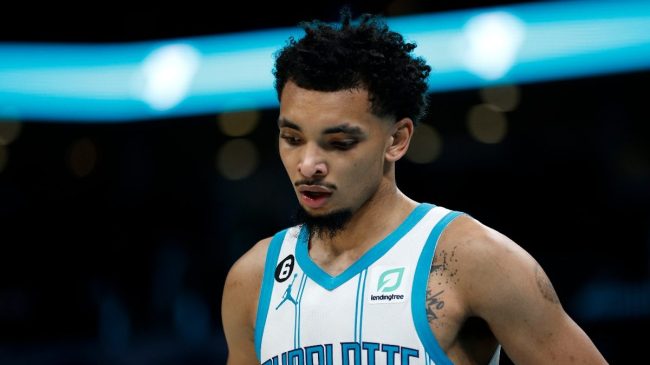 It’s been a wild offseason for the Charlotte Hornets, as the team has taken hit after hit with bad news. Now, they’re in an even more difficult position after James Bouknight was arrested again right before the NBA season opener. With this latest development, the fanbase is beginning to lose it.

According to NBA Central, “Bouknight was arrested on Oct. 16 for driving while impaired.” This is the fourth time the Hornets guard has been arrested for a similar crime in less than one year. Clearly, James Bouknight has a problem and hopefully, he receives the help he needs to straighten up.

James Bouknight was arrested on Oct. 16 for driving while impaired

Late Monday night, the Hornets acknowledged the situation with a short statement. “We are aware of the incident involving James Bouknight and are in the process of gathering additional information. We will have no further comment at this time.” For now, it’s unclear what Bouknight’s future looks like, as Charlotte is likely going to evaluate the situation before making a final decision.

The Charlotte Hornets have released the following statement:

“We are aware of the incident involving James Bouknight and are in the process of gathering additional information. We will have no further comment at this time.”

Hornets fans are simply in shock. The roster is at an all-time low right now as multiple players are facing criminal charges. On top of that, it’s not like this team is built like a playoff contender either. So this might just be another long NBA season for this franchise.

The Hornets’ statement did seem a bit familiar…

Charlotte might have the busiest PR team in the league right now.

Hornets PR after this offseason: pic.twitter.com/OQagQqiOga

It’s safe to say that James Bouknight has a problem.

2 times in the same week is crazy

We’ll see how it plays out, but it’s not looking great for James Bouknight. Hopefully, he can finally receive the help he clearly needs. As for the Hornets, this is another terrible look for what has been an abysmal offseason.