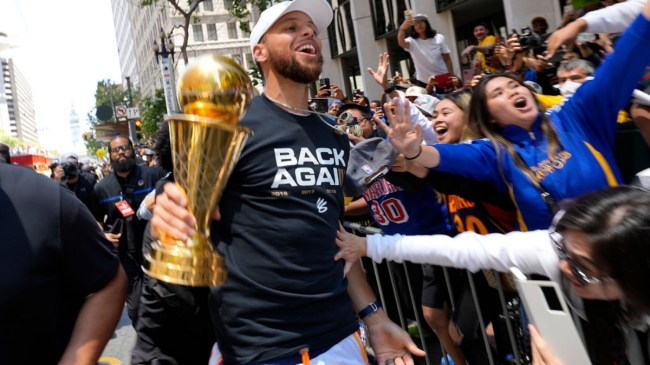 Steph Curry has only ever played for the Golden State Warriors throughout his NBA career. However, it seems there is one team that stands out as a potential next destination if for some reason he were to leave the Warriors.

Yesterday, Steph was accepting the key to the city of Charlotte (which definitely didn’t in any way influence his statement) when he said that if there was any team he’d play for besides the Warriors, it is the Charlotte Hornets.

.@StephenCurry30 says if he would play for any other NBA team besides the @warriors, it would be the @hornets! pic.twitter.com/dNpZkgxJ1F

There is obviously no reason why Steph or the Warriors would want to part ways with each other any time soon, but the Hornets would be an interesting next team for Steph if he were to part ways with Golden State.

Curry clearly has plenty of connection with the area having just been given the key to the city. Steph grew up in Charlotte and played college basketball nearby at Davidson. His father, Dell, played most of his NBA career with the Charlotte Hornets.

The team would be an intriguing one to watch with Steph. The Hornets would have plenty of offensive firepower with Steph joining Lamelo Ball in the backcourt and Terry Rozier coming off of a season where he averaged 19.3 points per game.

The team has a major question mark with Miles Bridges’ off-court situation.

They would also benefit from offloading Gordon Hayward’s contract.

However, if the Hornets were actually somehow able to get Steph Curry to team up with their young core, they could just be another piece or two away from becoming a contender in the East.