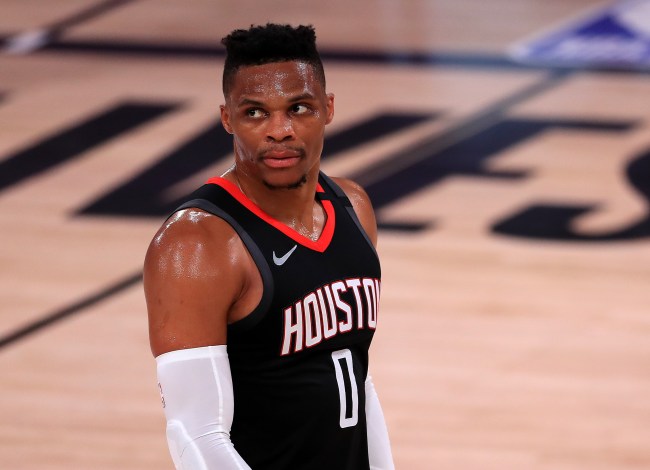 On Wednesday night it was reported by the Athletic’s Shams Charania that Westbrook was requesting a trade because he was uncomfortable with the team’s culture and wanted to go back to playing a “floor-general” style of play.

Westbrook, who has three years and $132.6 million remaining on his deal, has expressed the sentiment to Houston officials, sources said. Westbrook has informed team officials that he has been uneasy about the team’s accountability and culture, and wants to join a team where he can have a role similar to his prior, floor-general role in Oklahoma City.

Rockets beat reporter Mark Berman added that Westbrook wanted out of Houston because he wasn’t happy with Rockets’ style of play on offense.

Rockets fans went on to blast Westbrook on Twitter for not being happy about the offense considering the team went out of their way to accommodate him last season.

Everything was made to help out russ during the past season and now he comes out with this? 😒🤡 https://t.co/g7BQk1iF9Z

Just to be clear, we’re talking about the offense that was designed to accommodate his complete inability to shoot, correct? https://t.co/IIm0sOCGXv

The Rockets traded their only center so play a style that fits Westbrook better. Russ played abysmal basketball. Now, he wants out because that style doesn't fit? 🙃 https://t.co/9irREP2uL6

Our entire offence was tailored for him just to disappoint us i can't believe this shit 😂 https://t.co/PhqIE7KXMg

This is legit comical. They broke their backs to accommodate this guy and he's mad cause he can't have the ball in his hands nonstop. https://t.co/SyqLeULr1T