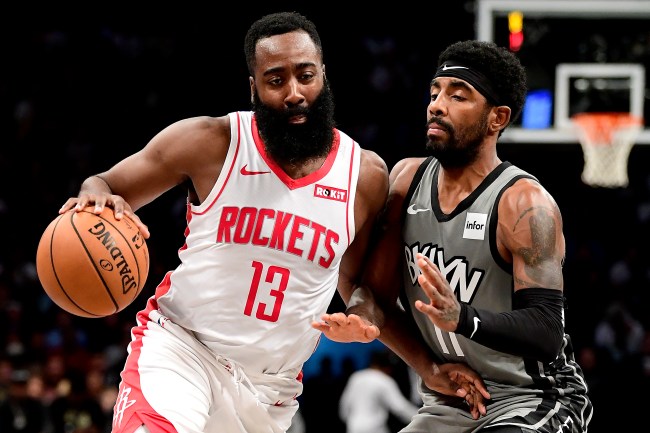 James Harden wants out of Houston but the Rockets may be playing a bit of hardball before letting him go.

On Monday night ESPN’s Adrian Wojnarowski reported that Harden had turned down a $50 million extension from the Rockets and told them to trade him to the Nets instead.

Houston Chronicle’s Harrison Faigen followed up by saying Harden is pushing hard for the Rockets to take whatever reasonable deal possible to get him to Brooklyn.

The Rockets are apparently in no rush to trade Harden and are only interested in a deal that would bring back either Kevin Durant or Kyrie Irving from the Nets according to The Athletic’s Shams Charania.

“The Nets, I’m told there’s not much interest on Houston’s part in any type of deal with them, unless it includes Kyrie Irving or Kevin Durant.

As far as the Sixers are concerned, unless they’re putting in Ben Simmons — which I’m told they’re not inclined to do right now — I don’t see a deal structure that makes sense with Philly, outside of a guy like Ben Simmons. The Sixers and Nets are going to have to see if they can cobble a deal together, but I don’t think there’s tremendous pressure right now on Houston.”

The Rockets are obviously not going to be able to get either Irving or Durant in a trade and are negotiating for a big haul in exchange for Harden. It’s currently unclear if the Nets have enough assets to sway the Rockets to trade Harden sooner than later.