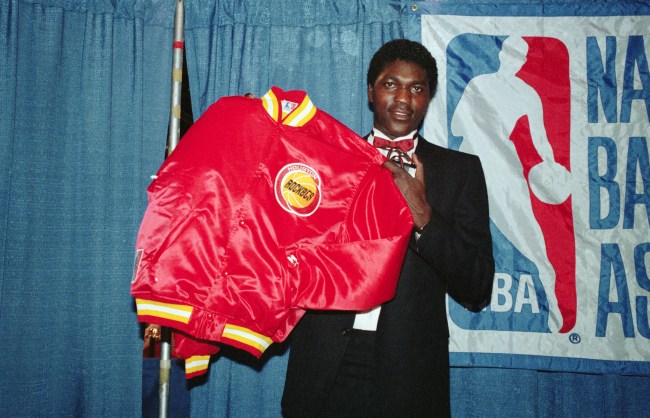 The Houston Rockets nearly put together an all-time Big Three before the whole trend was even popular — and, had they been able to pull it off, the NBA would’ve never been the same.

Here’s a quick history lesson: The 1984 NBA Draft was loaded with talent, with guys like Hakeem Olajuwon, Michael Jordan, Charles Barkley and John Stockton all becoming future Hall of Famers by the time each one of their careers ended. And, while nobody can ever anticipate just how great a player might become — if that were the case, no team would ever strikeout on their selections — it was pretty much a given that both Olajuwon and Jordan were going to be stars.

Now, the fact that Olajuwon and MJ won a combined eight NBA titles during their illustrious careers supports that claim — with the latter becoming the undeniable GOAT. But, remember, nobody could have foreseen the top pick in the 1984 NBA Draft (Hakeem) and the No. 3 overall pick (Jordan) accomplishing as much as they did. However, knowing what we do now, it’s fun to look back 36 years and wonder one of the biggest “what if…?” questions ever: What if the two actually played together from their rookie seasons onward?

That brings me back to the Houston Rockets and what they nearly pulled off in 1984 — pairing Hakeem Olajuwon, Michael Jordan and Clyde Drexler (who was drafted in the 1983 NBA Draft by the Portland Trail Blazers). Think this is absurd? Well, according to Olajuwon’s autobiography entitled Living the Dream, it was very much a possibility.

The book, which was released in 1995, mentions a potential trade before the 1984 NBA Draft that included Drexler and the No. 2 overall pick from Portland for big man Ralph Sampson (who was the top overall pick in the 1983 NBA Draft) — who the Houston Rockets eventually paired with Olajuwon to form the “Twin Towers.” Take a look at an excerpt below that gives more details.

In his autobiography, Living the Dream, Olajuwon mentions an intriguing draft trade offered to the Rockets that would have sent Clyde Drexler and the number two pick in the 1984 NBA draft from Portland in exchange for Ralph Sampson.[18] Had the Rockets made the deal, Olajuwon states the Rockets could have selected Michael Jordan with the number two pick to play alongside Olajuwon and Drexler, who had established chemistry playing together during their Phi Slama Jama days in college. Sportswriter Sam Smith speculates that such a trade “would have changed league history and maybe the entire Michael Jordan legend”.[18] From 1991 to 1998, every NBA championship team included either Jordan or Olajuwon; furthermore, at least one of Drexler, Jordan, and Olajuwon was involved in every NBA Finals from 1990 to 1998.

As absurd as it sounds right now to think about Olajuwon, Jordan and Drexler all playing together because we know how all three of their careers ended up, in 1984, it was very much a possibility. Remember, Ralph Sampson was no bum — as evident by his induction into the Hoops Hall of Fame in 2011 — so it wasn’t as if the Blazers were just giving away the talented Clyde Drexler and No. 2 pick for nothing.

Obviously, the deal between the Houston Rockets and Portland Trail Blazers didn’t go through, but, sheesh, imagine if it had? From 1990-98, the NBA Finals included Olajuwon, Jordan and Drexler, so it’s terrifying (and intriguing) to think about what could’ve been had the Rockets and Blazers actually pulled off that wild trade in 1984. Sadly, we’re all just left to wonder.