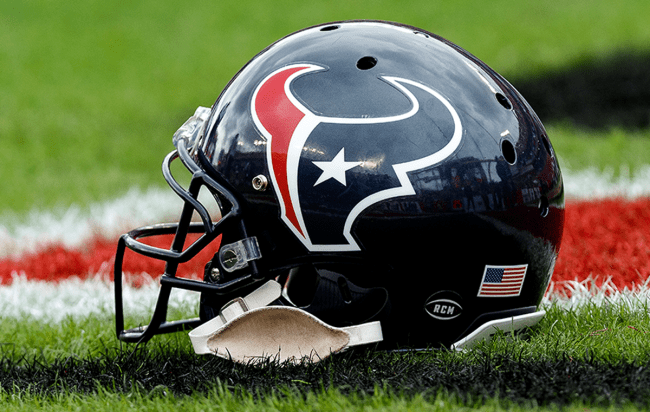 The Houston Texans are in the midst of one of the most nightmarish years in recent memory to a point where making fun of the team is like shooting fish in a barrel if the fish were the size of elephants and the barrel was the size of a kiddie pool.

Picking which of the team’s problems to make fun of is like trying to decide what you’re getting for dinner at a Cheesecake Factory. Should I go with the DeAndre Hopkins trade? Releasing J.J. Watt? Jack Easterby’s ability to make fans wish Bill O’Brien was still calling the shots? The fact that DeShaun Watson might not even play this season? I don’t even know where to start.

What happened to the Houston Texans? After all, this is the same team that jumped out to a 21-0 lead against the Chiefs in the Divisional Round of the AFC Playoffs last year before Kansas City decided to start playing football and walked away with a 51-31 victory. Was that loss the catalyst for the collapse of the entire franchise?

At first glance, that would appear to be the case, as it broke O’Brien’s brain enough to make him think the Hopkins trade was a good idea before he lost the ability to do something even dumber when he was fired following their 0-4 start last season. Just when you thought things couldn’t get much worse, Easterby said, “Hold my beer!” when he effectively seized control despite lacking any of the qualifications to do so, which resulted in a 4-12 finish that resulted in Watt asking for a change of scenery and Watson threatening to sit out if he doesn’t get the same.

However, I would argue things didn’t start to fall apart a year ago. In fact, I would suggest with a healthy amount of confidence that all of these struggles can be traced back much, much further and have less to do with unqualified executives and questionable personnel decisions than they do with the real catalyst: jackets.

The Houston Texans now have letterman jackets (via @ConnorBarwin98) pic.twitter.com/IcV58AiT

What do you think of the #Texans letterman jackets?! pic.twitter.com/KH1foUtM

Back in December 2012, the Texans were riding pretty high. The team was 11-1 heading into Week 14 and feeling pretty, pretty good about themselves as they geared up to face off against the Patriots on Monday Night Football.

In fact, the Texans were feeling so good that they decided to do something to celebrate, as nose tackle Shaun Cody went out and had varsity letterman jackets made for the entire team. Why? Here’s what linebacker Connor Barwin said when asked about the move before the showdown:

“I used to say before the season it feels like we’re on a college team. Everybody gets along, we have so much fun. And this jacket, you feel like you’re on a high school team where it’s all about winning, it’s all about being around a group of guys.

This jacket is just another symbol of that. There’s no names on it. You just have your number, your position group and the Texans logo.”

I probably don’t have to remind you that 2012 was arguably the height of the Tom Brady Era, and despite knowing there’s nothing Bill Belichick loves more than some bulletin board material, the largely unproven Texans rolled into Foxborough looking (albeit intentionally) like a high school team for a primetime matchup against a 9-3 New England squad in the midst of a revenge tour after losing the Super Bowl the previous year.

Did Belichick probably see all this unfolding and smile the most devious of smiles? Did Brady catch a glimpse of the team making their way into Gillette Stadium draped in the jackets before the game and think to himself, “What a bunch of non-avocado ice cream-eating jerks?” Probably.

So how did that end up working out for the Texans? Not great!

When the final whistle blew, Houston left the field on the losing end of a 42-14 contest that somehow wasn’t as close as the score doesn’t even really suggest. Brady threw for almost 300 yards and four touchdowns, while Watt (who was considered an MVP candidate heading into the game) was held to just four tackles.

A few weeks later, the Patriots would end the Texans’ season in the Divisional Round of the playoffs, and since that fateful Monday night, New England has had an 8-2 record when playing Houston.

At least they got some sweet jackets out of it?

So how does this connect to the situation in Houston today? Did it help create a current of inferiority running swiftly below the foundations of the organization that’s played a role in the disastrous moves they’ve made recently? Was this tiny saga the sartorial equivalent of a bad acid trip that permanently broke a franchise that will never be able to put everything back together no matter how hard it tries? Perhaps the Texans secretly enjoyed being endlessly mocked as a result and can only feel truly happy when they’re being mercilessly ridiculed?

I don’t know, but I don’t think it’s crazy to suggest any (or all) of those might be true.

What I do know is those jackets were dumb as hell. I remember watching that game back in 2012, and when I saw the Texans walking into the stadium thinking they looked amazing and unstoppable, all I could do was laugh. You just knew the Patriots were going to wipe the floor with them. They looked like a high school team but not the good kind of high school team; no, they were a private academy located in a rich suburb coming to play a public school in a factory town that wanted nothing more than to send them back to their ivory towers, lush quads, and cushy residents halls with memories they wish they could forget.

You know what? Maybe we shouldn’t be so shocked by the current state of affairs. Maybe the Great Jacket Debacle of 2012 was the Texans letting the world know that making completely asinine decisions that backfire fantastically is kind of what they do. I almost feel like we should be praising them for their consistency.

So, good work, Texans. What you’ve done is impressive—now do the right thing and trade DeShaun. He deserves better.