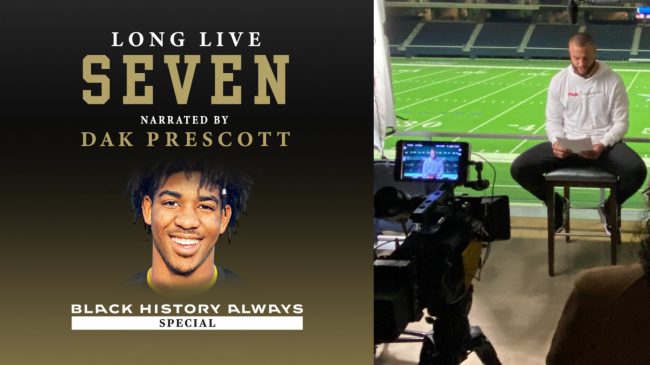 Year after year, the true reality of the sports world remains hidden to the majority of society. We’ve often ignored the true ugliness of what athletes face in pursuing their sporting dreams. With millions of eyes glued to the action and even more money tied to the industry, the much-needed conversation around mental health has been pushed to the side all too often.

Thankfully, that is changing.

In the past year alone, we’ve seen several NFL stars, including Dak Prescott, Calvin Ridley, and A.J. Brown speak up about their own struggles with mental health. And that conversation is only growing, thanks to an emphasis on mental well-being from high-profile athletes in all sports.

Long Live Seven: The Bryce ‘Simba’ Gowdy Story shares the heartbreaking story of Bryce Gowdy, a talented high school student-athlete who took his own life weeks before joining the Georgia Tech football team. The documentary, narrated by Dak Prescott, is now streaming via The Undefeated on ESPN+.

While Gowdy’s story is no doubt a gut-wrenching one, the legacy he has left behind continues to inform and help people in similar situations all over the world. That’s what Gowdy’s mother, Shibbon Mitchell, hopes for—that sharing her son’s story will help save lives.

Shortly after the passing of her son, Mitchell launched The Bryce Gowdy Foundation with the following goal:

“To provide space for our youth and young adults to manage their phyiscal, mental, and emotional wellbeing through mentorship, education, movement, and creativity. As we establish a village network that provides resources for young minds & hearts to develop and thrive in their academic, creative, athletic and life interest.”

Mitchell didn’t want to see local mental health services fail others, in the way they did for Gowdy. So she has continued to share her son’s story, in addition to creating several initiatives under the foundation. Doing it all with the goal of normalizing the conversation around mental health, specifically in the black community.

Back in Gowdy’s hometown of Deerfield Beach, Florida, the inaugural Sevenfor7 football camp was established with an emphasis on raising awareness about mental health. Through Education & Training, Camps & Tournaments, and Advocacy & Research, Sevenfor7 works to create an environment of success for aspiring young athletes.

Alongside Severnfor7 is The Be7ieve Project, a nonprofit organization looking to remove the stigma on mental health through open discussion. In fact, the process in which The Be7ieve Project goes about creating a network of support for Mental Health, anti-bullying, suicide, and overall wellness, is one everyone can learn from.

It can all begin with a simple conversation.

There’s a reason mental health has taken so long to arrive at the forefront of the conversation. It’s not an easy topic to tackle. And that’s especially so when the number of voices engaging in the conversation are far and few between.

Even professional athletes joining the conversation only marks a small step forward in the grand scheme of things. They’ve shone the spotlight onto mental health, but that’s only important if all of us join in on the conversation. Only then can steps be made to remove the stigma surrounding mental health.

It can be as simple as checking in on a friend going through hard times. Or something more immersive like getting involved with initiatives from The Bryce Gowdy Foundation. Whatever the preference, there’s plenty of actions, big or small, that anyone can take to do their part in raising awareness about mental health.

Realizing the importance of focusing on our mental well-being will be a huge step forward in normalizing the conversation around mental health. And together, we can ensure bright futures like that of Bryce Gowdy, no longer end with the same tragedy.

Long Live Seven: The Bryce ‘Simba’ Gowdy Story is a part of ESPN’s Black History Always platform with The Undefeated, an initiative launched in January 2021 to further explore the intersections of sports, race, and culture with original storytelling, all year long.

The network’s commitment pledges to highlight Black stories beyond the traditional Black History Month in February.

Look for Black History Always content via The Undefeated on ESPN+.