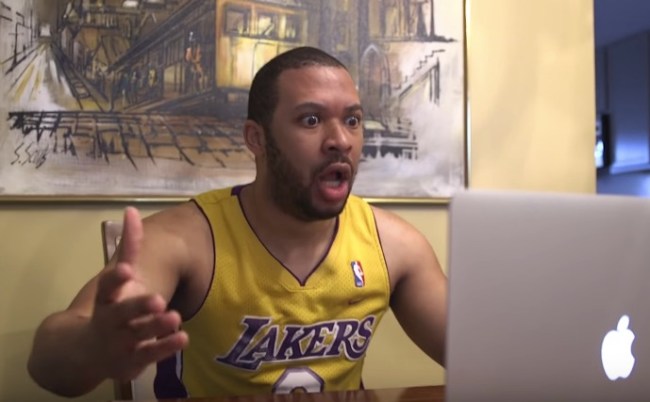 The 2018 NBA Free Agency period has a dang roller coaster of emotion. LeBron James didn’t shock anyone but Cavs fans when he left Cleveland to sign with the Lakers. Kevin Durant re-signed with the Warriors for one year. Paul George and Nikola Jokic each signed contracts worth more than $137 million. DeMarcus Cousins to the Warriors. DeAndre Jordan to the Mavs. Julius Randle to the Pelicans. Trevor Ariza to the Suns…The list of moves goes on and on and it’s expected to continue.

Scooter Magruder is famous for perfecting ‘stuff people say’ videos. He does videos like ‘Things Fortnite Players Say‘ and ‘Things SEC Fans Say‘….You know him, you’ve seen the videos, and you know this one’s going to be great:

VegasInsider currently has the Golden State Warriors as the favorite to win the 2018-2019 NBA Championship. The Warriors have 5 or 6 players who are individually better than the #1 player on multiple NBA teams, and they 2/3 to win it all next year followed by the Celtics and Lakers (both at 5/1) and the Rockets at 8/1. The 76ers are 10/1 followed by Spurs at 40/1 and the Thunder at 50/1.

I’d say there’s no point in even playing the regular season next year because it’s a foregone conclusion that Golden State is going to win the Championship but then I think back to Leicester City winning the 2016 Premier League at 5,000-to-1 odds when there were multiple teams in the Premier League who were as stacked (in soccer) as Golden State is. Anything can happen.