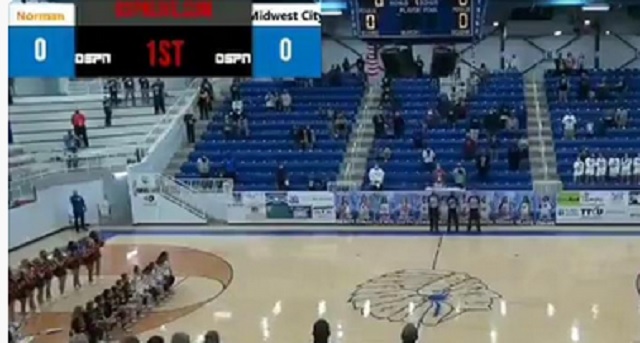 The Oklahoma high school basketball announcer who was caught on hot mic using the N-word has come forward and he’s blaming the incident on an illness.

On Friday afternoon, the announcer was busted calling players “f***ing n*****s” for kneeling during the national anthem before a game.

Hey @NFHSNetwork looks like you forgot to cut the Mic!!! "F****** N******" is the one that really got me!! Tell us how you really feel!! THIS IS WHY THEY KNEEL!!!@Migliorino_Nick @tohara_o @NHS_AthDept @gonormantigers pic.twitter.com/mmWQAecLaF

After not being initially named, the announcer, Matt Rowan, issued a press release in which he blames his diabetes for making him “disoriented” which led him to hurl racist slurs at the players.

The announcer who made the racist statements is partially blaming it on low blood sugar. pic.twitter.com/6cTwIZdJZI 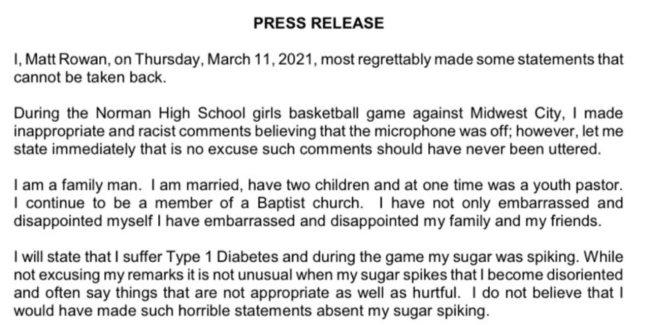 Of course, people on the internet weren’t buying his “sugar spike” excuse.

……..in the statement, Matt Rowan blames his racist comments and use of the n-word on type 1 diabetes. HE BLAMED RACISM ON HIS SUGAR SPIKE. pic.twitter.com/g8LzRjTiQX

Ah yes, because as we all know, Type 1 Diabetes causes racism. https://t.co/mqtI3xiY7v

ah yes, racism is a well-known symptom of diabetes https://t.co/kk9pcyEKhW

"the diabetes made me do it" is the single funniest excuse for racism ever and it can never be topped https://t.co/HK14Xy0h5l

Blaming your blatant racism on diabetes is something I did not see coming…. it’s pathetic