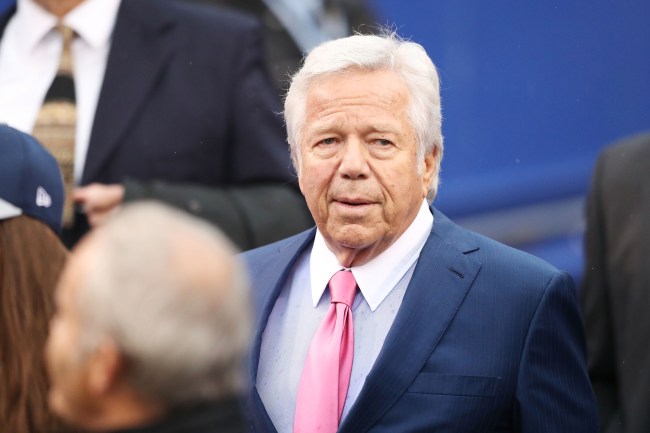 Early this morning we learned that Robert Kraft was being charged with two counts of soliciting prostitution. The charge stems from a widespread sex trafficking investigation from Palm Beach to Orlando that could lead to hundreds of arrests.

We now have details of what went on behind the scenes at the sex spa where Kraft visited on at least two occasions and it’s absolutely horrifying what these women had to go through.

According to police reports many of the enslaved women came from China on temporary work visas and believed they had legitimate jobs waiting for them. Instead they were forced to work long hours and have sex with up to 1,500 men a year.

Via The TC Palm

Detectives watched the Orlando couple transport multiple women with suitcases to and from the spa, “for the purpose of sexual servitude,” according to her arrest warrant. Police said victims, identified in court records as Jane Does, lived inside the spas and worked as prostitutes. Some stayed for days, others for months. None were allowed to leave on their own.

Currey said many came from China on temporary work visas, indebted to the brokers who helped them reach America, but believing legitimate jobs awaited them. Bank records revealed the spa owners also paid for Backpage.com advertisements. In September, a Vero Beach detective twice visited undercover, equipped with a camera, a recorder and cash. Each time, he asked for a 30-minute massage, paid $50 and was escorted to a dimly lit room.

After a rubdown, his masseuse would offer various sexual favors — intercourse for $160 to $200, oral sex for $100 and stimulation by hand for $40 to $60. Each time, the detective said he was short on cash and would return. In November, Circuit Judge Cynthia Cox approved the secret installation of surveillance cameras inside. Between Nov. 30 and Jan. 10, police observed 140 sex acts performed for money, resulting in charges against several of the spa’s employees, including Xu, Ren and Dong, and the spa’s manager, Lanyun Ma.

Martin County Sheriff says the women involved in human trafficking ring were given no days off. They averaged about 1,500 men a year. He says their hygiene was “minimal” at best @NBC10Boston

Vero Beach Police Chief David Curry said many of the female victims "working" at the spas came from China on temporary work visas, indebted to the the brokers who helped them reach America, but believing legitimate jobs awaited them. https://t.co/6dpPrccUte

Kraft has denied the allegations made against him by police.

In response to Florida police announcing Robert Kraft will be charged w/ solicitation of prostitution, a Kraft spokesman’s statement reads, “We categorically deny that Mr. Kraft engaged in any illegal activity. Because it is a judicial matter, we will not be commenting further.”

While Kraft is obviously not involved in what transpired behind the scenes at the spa it’s still not a good look for him to be involved with enslaved sex traffic workers.

OK EVERYONE what is being described HERE IS HUMAN TRAFFICKING. Not women who wanted to willingly be sex workers. If this holds true, should be more than a slap on the wrist for Kraft from the league. This is a major problem & they succeed due to men soliciting, even if unaware. https://t.co/H3ASDH7OwG