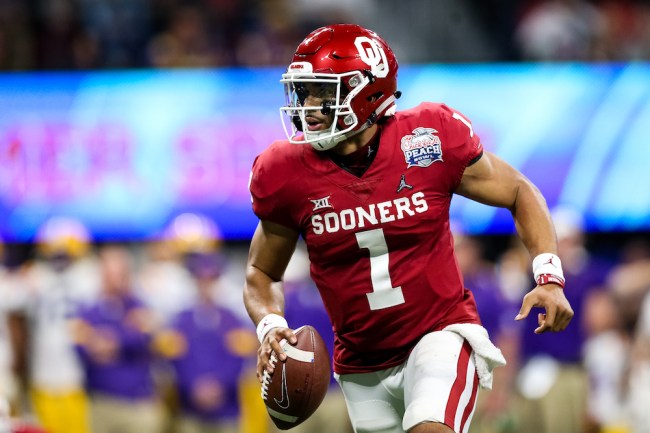 Philadelphia Eagles fans were beyond confused during the second round of the NFL Draft when the team used a pick to take quarterback Jalen Hurts.

Beyond confused is a nice way of saying angry as hell.

NFL pundits are trying to make sense of the pick and NFL Network Insider Ian Rapoport joined Rich Eisen to kinda, sorta, try to explain the thinking process behind the Eagles taking the Oklahoma quarterback.

“I don’t know, maybe since the Eagles passed on Ricky Williams and ended up with a quarterback who led them to a Super Bowl?”

OK, there’s more, he was making a bad joke. Not a WNBA Draft-level bad joke but let’s give old Rappy a chance.

“I think everything around the Eagles, they want it to revolve around the quarterback position. The traded up for Carson and took all that capital, they got him, they paid him a ton of money, $100 million, a huge contract and all of that. But he’s been injured.

Nick Foles is not always going to be there to rescue.

My understanding is that this was an easy pick for the team. They talked about it, they gave Carson Wentz a little heads up that this could be coming today.

When it got to them on the board he was by far the highest-rated player on their board, and they took him.”

Rapoport then took a guess as to how Hurts could fit into the Eagles offense next season.

“They’ll use him (Hurts) a little bit like Taysom Hill. They make him run the ball, they’ll potentially take Carson Wentz off the field, which I’m not sure he’s going to like.”

Eisen, bless his soul, is quick to point out that if this pick is an insurance policy for the 27-year-old Wentz, the Eagles are doing it a season after he “answered the bell”, played all 17 games, and made the playoffs with a horrendous wide receiver corp.

“This kinda reminds of the Jimmy Garoppolo pick,” Rapoport added. “He played a little bit, and they invested three years in someone who was a backup. But, he was on their game-day roster, and they traded him for a second-rounder.”

So Hurts could potentially end up seeing a little time, sit on the bench for a few seasons, then get traded to another team and lead that team to a Super Bowl appearance.

That should make Eagles fans feel better. Let’s check in on them to find out.

Please stop comparing this to the Saints/Taysom Hill.

Hill was an undrafted free agent that the Saints signed when Brees was 37 years old.

The Eagles just used a 2nd round pick on Hurts when Wentz is 27 years old, and he had the worst WR unit in the NFL last year.

Hope the Eagles take a hockey player in the third round

Spring 2020: Eagles draft a Heisman Finalist Quarterback in the second round

“With the 53rd pick in the NFL draft, the Philadelphia Eagles select the only thing they don’t need” pic.twitter.com/8mlyBBwcXi

Nope. They don’t feel any better.