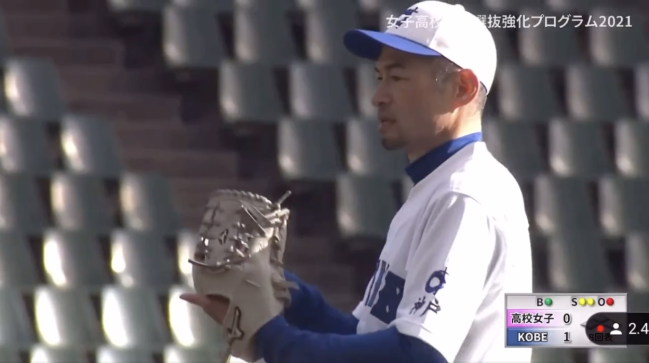 Ichiro Suzuki is the best. The 48-year-old retired MLBer is in the middle of a tour through Japan and has been stopping at high schools along the way to share some tips and show off.

A few weeks ago he swung by Kokugakuin Kugayama High School and couldn’t stop mashing dingers during batting practice. Earlier this weekend, he traded in his bat for a glove and took the mound against an all-female All-Star team.

Rather than just lobbing them in against the opposing lineup, he put everything he had into the pitching appearance. Ichiro reportedly went all nine innings, threw 147 pitches, struck out 17, topped out at 85 miles per hour and didn’t allow a run.

He was throwing some nasty cheddar and the all-girls team couldn’t touch him.

Ichiro was throwing gas, caught them off-guard with his off-speed breaking ball and absolutely diced them up. Look at this filth:

At one point, he even made sure to claim the plate as his own. It was unintentional and Ichiro bowed in apology after it happened, but he threw one up and in and caught the batter in the shoulder. He was not happy with himself.

Ichiro says: "Get off my Plate!!" pic.twitter.com/2WGq9OYRNc

He actually had a pitch get away from him on more than one occasion. Both wild pitches even appeared to be against the same girl, wearing No. 2, but she took it in stride and seemed to be having a blast.

To get their revenge, reports say that the all-girls team held Ichiro to an 0-3 day at the plate.

He was really out there doing it all. Here are the full highlights: