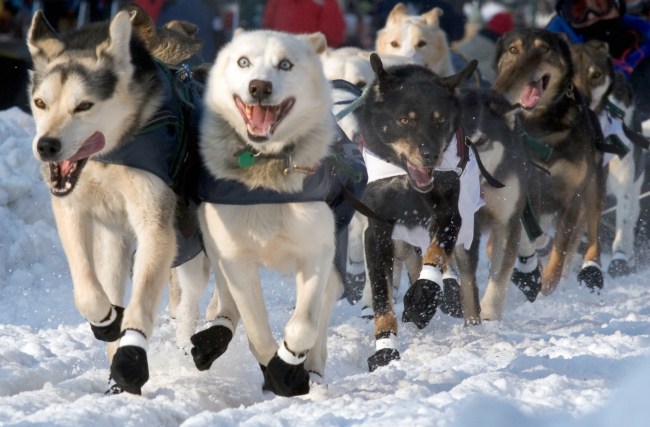 I stumbled onto the Iditarod 2019 race standings last week after I queued up that show Losers on Netflix where each episode tells the tale of a historic loss in sports like Jean van de Velde’s epic meltdown at the 1999 Open Championship, or dog sledder/racer Aliy Zirkle who lost the Iditarod after being attacked by a drunk snowmobiler who killed and injured some of her dogs.

I wanted to see if Aliy Zirkle won the last year or two, or when the Iditarod even was this year, and when I pulled up the standings last week she was actually in first place. Currently, she’s in 4th (if you care), but this isn’t about her.

French racer Nicolas Petit was leading the race and with 200 miles to go he had a 5 HOUR LEAD. That would be nearly impossible to fuck up unless something catastrophic happened, right? Well, Nicolas Petit is now officially ‘scratched’ and out of the race after everything fell apart on the Bering Sea.

It started when one of Nicolas’ younger dogs attempted to use the bathroom, an older dog jumped on the younger dog, and Nicolas scolded/yelled at the dogs. That sent a rift through the team and the dogs straight up refused to race.

Here’s what he told KTUU.com:

According to Petit, his dogs flew out of Shaktoolik “like a rocket” but, when one of his dogs went to go to the bathroom, another dog “got a hold of him at one point, he jumped on him while he was on the ground.”

Petit then yelled at the older dog to leave the younger dog alone, and that’s when Petit said the other dogs changed.

“Everybody heard daddy yelling. Which doesn’t happen. And then they wouldn’t go anymore. Anywhere,” he said.

This is breaking the rules of Puppy School 101, my dude. I remember going to early obedience classes with my dog a few years ago and one of the very first things they teach you is to NEVER EVER EVER yell at your dog. Dogs don’t respond well to scolding, they respond well to reinforcement for good behavior.

According to For The Win, Petit had left the Unalakleet checkpoint with a 14-mile, 5-hour lead when shortly after people noticed some strange things going on with his GPS. The landscape is unwelcoming so it’s not unreasonable to worry that someone was injured but a full-blown strike from the dogs? Nobody saw that coming:

Iditarod followers noticed that the GPS tracking for Petit’s sled had stalled on the Bering Sea at speeds below 2 mph and then hovered right at 0 mph. The extended delay in the middle of the sea shrunk his lead until it was gone. He went from first by five hours to his current position of fourth place.

According to Petit, the mishap unfolded when two of his dogs on the 10-dog team started fighting about a bathroom break. When he yelled at the dogs to stop, the rest of the team simply refused to continue. (via)

Don’t yell at your dogs. Just don’t do it. If you need an example of why you shouldn’t yell at your dogs then think about this guy who was leading the most prestigious dog sledding race in the world by FIVE HOURS and blew the lead all because he scolded one of his dogs and all of the others went on strike.

For the updated races standings you can click here. There are 45 racers left in the field with Alaska’s Peter Kaiers leading the race by just a few minutes. Some other crazy news out of the 2019 Iditarod is this composer who lost a finger and just had it reattached after fulfilling a lifelong dream to see the race.