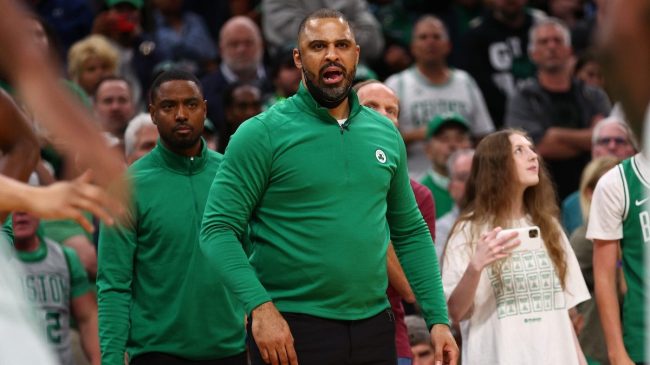 The Boston Celtics shocked the NBA world after announcing a full-season suspension for head coach Ime Udoka. This jeopardizes the team’s championship hopes, but for now, Joe Mazzulla is the interim coach for the squad. However, it sounds like the organization is seeking more help for Mazulla, as the front office reaches out to the Los Angeles Clippers staff for help.

According to Adrian Wojnarowski, “the Celtics are seeking permission to talk to Clippers assistant Jay Larranaga about joining interim coach Joe Mazzulla’s staff this season.” Larranaga has plenty of experience working with Boston, as he “spent nine seasons with Celtics before joining Clippers in 2021.” This sounds like a fantastic idea for this organization considering they’ll be without Ime Udoka all year long.

Considering this franchise has a championship title within its sights, it makes sense why they’d seek more help for the coaching staff. We’ll see if LA is willing to give up Jay Larranaga though, as his experience could be used to help the Clippers make a serious run at the title as well. We’ll see how it plays out, but it’s interesting to see how the Celtics are responding to Ime Udoka’s sudden suspension.

Giving Joe Mazzulla all of the help he needs is a brilliant move. And who knows? Mazzulla could prove himself worthy as a head coach this season. This is a massive opportunity for him, as he has one of the best rosters one could ask for.

Keep an eye on the Celtics, as they’re doing everything possible to remain competitive without Ime Udoka leading the way.