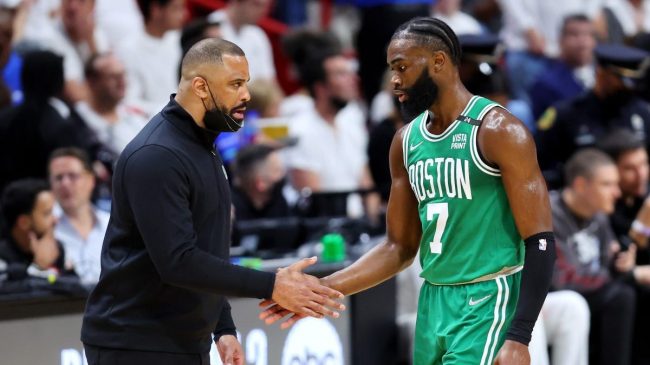 Boston suspended Udoka for an entire season last week after an investigation revealed a violation of the team’s personal conduct policy.

Udoka later released a prepared statement on the matter, but he has yet to address the allegations publicly.

Boston held its annual media day on Monday ahead of the 2022-23 NBA season. Star forward Jaylen Brown, who himself has had an interesting offseason, weighed in on the Udoka matter.

But his comments didn’t clear anything up. On the contrary, they may have muddied the waters even more than they already were.

When asked about the matter, Brown said that he wished he had more details on the situation. But what he said next may prove to be a PR nightmare for the Celtics.

Brown: "I wish we had more details [about the Udoka suspension]. From what we know, it’s hard to make a decision whether it’s consensual or not … I guess there is more to it, possibly. We don’t know."

Brown said that “it’s hard to make a decision whether it’s consensual or not,” regarding the relationship with Udoka and a team staff member.

Celtics majority owner Wyc Grousbeck said at a press conference last week that the team discovered a “volume of violations.” But Grousbeck did not specify what those violations were.

The lack of answers also led many media members to ask why Udoka was suspended rather than fired. The Celtics also did not address that question.

Brown’s answer presents the possibility that Udoka’s relationship(s) was not consensual. The Celtics would come under fire from a number of angles should that prove to be true.

It’s just the latest update in a story that continues to take twists and turns with each passing day.