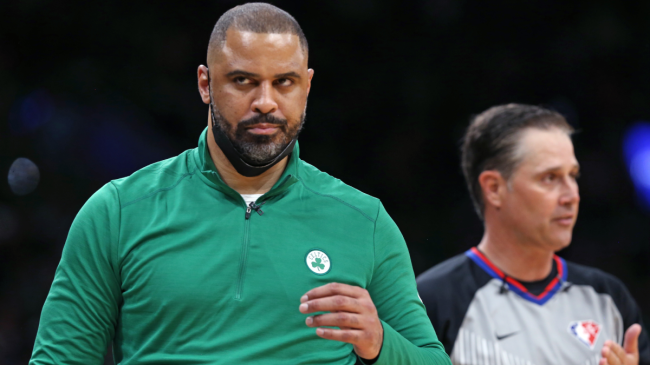 The Boston Celtics have officially suspended head coach Ime Udoka for the 2022-23 season.

There were reports that surfaced early Thursday about the possibility of a suspension due to alleged misconduct from the team. It later came out that he was reportedly having a consensual relationship with a female staff member in the Celtics organization.

How do you cheat on Nia Long??

Now, those rumors have come to fruition with the team giving their head coach a one-year ban. They posted the following message on social media Thursday night.

The Boston Celtics announced today that the team has suspended Head Coach Ime Udoka for the 2022-23 season for violations of team policies. A decision about his future with the Celtics beyond this season will be made at a later date. The suspension takes effect immediately.

Brutal news for Boston fans. Udoka just led the team to the NBA Finals this past season, and the roster seemed primed to make another run. Without their leader at the helm, though, things get a bit tougher.

Following the news of the suspension, Udoka released a statement of his own.

Udoka released a statement following the Celtics’ decision to suspend him, apologizing for the misconduct.

“I want to apologize to our players, fans, the entire Celtics organization, and my family for letting them down. I am sorry for putting the team in this difficult situation, and I accept the team’s decision. Out of respect for everyone involved, I have no further comment.”

Fans were quick to react to the apology, having mixed feelings on the year-long ban. Take a look at the immediate response on social media.

Some believe that the suspension is too harsh, saying that a consensual relationship shouldn’t garner a one-year penalty.

Others, though, realize that he violated team rules, with some even noting the potential severity of the issue.

it's really not overblown. People aren't looking at this from a business side. All it takes is for something to go wrong in the relationship and the Celtics are all of a sudden facing a huge lawsuit.

It will be interesting to see how the Celtics perform without Udoka on the bench this season.