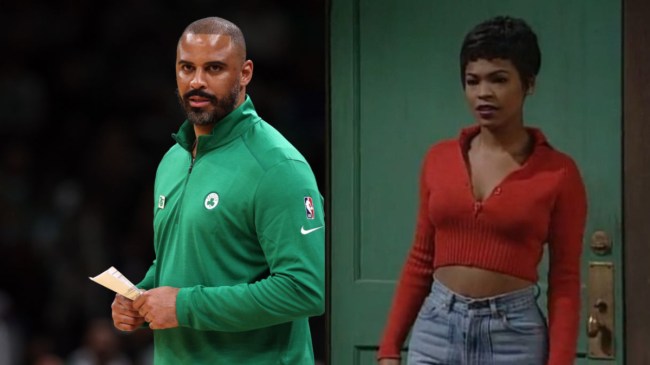 The NBA world has been reeling on Thursday following reports that Boston Celtics head coach Ime Udoka — who led the C’s to the NBA Finals in his first season as the team’s coach — is facing a year-long suspension due to workplace misconduct.

According to reports from The Athletic, the 45-year-old “Udoka had an improper intimate and consensual relationship with a female member of the team staff” and it’s been “deemed a violation of franchise’s code of conduct.”

To make the story even more headline-worthy is the fact that Udoka — quite low-key, I might add — has been in a relationship with actress Nia Long of Fresh Prince of Bel-Air and Friday fame for over a decade, thus making his decision to cheat even more baffling.

It should be pointed out, of course, that Nia Long is *still* absolutely drop-dead gorgeous. We just mentioned her status in the 1990s because her performance as Lisa Wilkes on The Fresh Prince of Bel-Air made her a pop cultural “It Girl” — women wanted to be her and men wanted to be with her. And Ime Udoka wound up being the one who pulled it off and he blew it.

Needless to say, the Celtics coach has been getting absolutely crushed for his decision-making, because not only did he get caught cheating at work, but he cheated on Nia Long, everyone’s dream girl.

I’ve never seen an L worse than this one.

Everyone consoling Nia Long after the Ime Udoka news pic.twitter.com/l0cWK1zbHa

One dude pointed out that if he was one of Ime Udoka’s players, he’d never be able to trust his judgment again:

When your wife is Nia Long? Yes. I recommend jail time. https://t.co/MQQpVgonzx

“Cheating on Nia Long is not something a sane man does,” said one Twitter user.

Cheating on Nia Long is not something a sane man does. Ime Udoka must’ve gotten CTE from coaching Al Horford

Ime Udoka cheated on Nia Long, get him out the league

Listen, if the Celtics brass found out Ime Udoka was cheating on Nia Long, a suspension is not enough.

At this time, Udoka has yet to release a public statement addressing the alleged incident.