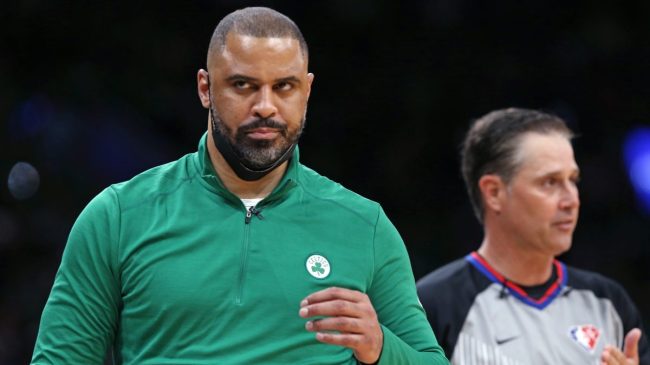 Much like New York City, the NBA never sleeps. There is perhaps no better example of this than the absolutely insane news that ESPN’s Adrian Wojnarowski and The Athletic’s Shams Charania dropped on fans late Wednesday night.

Woj kicked things off at 10:35 p.m. ET with a series of tweets claiming that the Boston Celtics could suspend head coach Ime Udoka for “an unspecified violation of organizational guidelines.”

ESPN Sources: Boston Celtics coach Ime Udoka is facing possible disciplinary action – including a significant suspension – for an unspecified violation of organizational guidelines. Discussions are ongoing within the Celtics on a final determination. pic.twitter.com/1QZb0k326F

Udoka was a revelation in the 2021-22 season. After taking over for Brad Stevens, the first-year head coach led Boston to the NBA Finals and is considered one of the league’s brightest young minds.

Udoka led the Celtics to the Eastern Conference championship and a berth in the NBA Finals against the Golden State Warriors in his first season as head coach.

Woj’s tweet immediately began the speculation on NBA Twitter. The first two theories were that Udoka had either slept with someone he shouldn’t have or faked information about his or his players’ vaccination status.

According to rumors Ime has either:

-Slept with an employee of the organization

-Assaulted someone while under the influence

The internet gets working fast on everybody's versions of the truth

However, it wasn’t long before Charania cleared things up.

As it turns out, fans were correct about one of the two theories.

Celtics coach Ime Udoka had an improper intimate and consensual relationship with a female member of the team staff, sources tell @TheAthletic @Stadium. It’s been deemed a violation of franchise’s code of conduct.

The issue is so serious that the Celtics are reportedly willing to suspend Udoka for the entirety of the 2022-23 NBA season.

No final decision has been made on the length of a suspension, but internal discussions have included scenarios that would keep Udoka out for the entirety of the 2022-2023 season, sources told ESPN. https://t.co/Vnn2wWVcKA

Wojnarowski has since reported that the suspension will be for the entire 2022-23 season. Assistant coach Joe Mazzula will “likely” take over on an interim basis.

The news of Udoka’s improper relationship caught everyone off guard. Not just because it was unexpected. But also because the Boston coach is in a long-term relationship with superstar actor Nia Long. Fans immediately ran to Long’s social media accounts to check out her recent posts.

Neither sports fans nor movie fans could believe the news was true.

THIS MAN MOVED ✨NIA LONG✨ TO 🤡BOSTON🤡 and CHEATED ON HER??? ooooomg I’ve never hated the Celtics more in my fucking life https://t.co/w3mePWXtxA

Listen, if the Celtics brass found out Ime Udoka was cheating on Nia Long, a suspension is not enough.

Ime Udoka cheated on Nia Long, get him out the league

The Udoka new is just the latest in a tumultuous offseason for the Eastern Conference champions. Star forward Jaylen Brown was upset with the team after talks of him being traded for Kevin Durant. Then starting center Robert Williams underwent yet another knee surgery.

But the Udoka news takes the cake as most notable by far. And it appears the story is only just starting to develop.