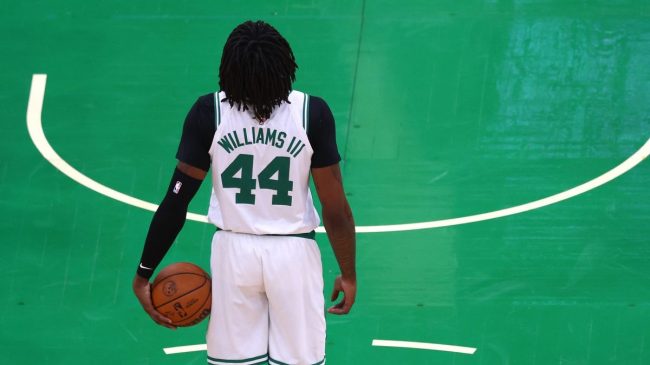 An already rocky offseason offseason got even more complicated with news of a second knee surgery for center Robert Williams III.

Williams has dealt with injury concerns since before he even entered the NBA. Those concerns saw him slip to the Boston Celtics with the 27th pick in the 2018 draft. He’s since turned himself into one of the league’s best defensive players and was a second-team All-Defense selection this past season.

But the injury bug reared its head again late in the season.

Williams tore his meniscus in March and had surgery which kept him out a month before returning for the first round of the NBA playoffs.

While doctors said Williams was healthy to return, he played through pain for the entirety of the Celtics’ run to the NBA Finals.

One former Celtics star suggested maybe Williams think twice about playing through injury, and now it appears he may have been right all along.

Adrian Wojnarowski of ESPN reported Tuesday afternoon that Williams would miss 4-to-6 weeks after having to undergo a second procedure on the same knee.

Boston Celtics center Robert Williams is undergoing arthroscopic procedure on his left knee and is expected to need 4-to-6 weeks for recovery, sources tell ESPN. Williams had meniscus surgery in March and played through the playoffs

The injury could see the Celtics’ big man miss the start of the 2022-23 season. Many fans are recalling former Celtic Isaiah Thomas’ advice to Williams before the NBA Finals.

Heard that before lol https://t.co/oxOEWdvRyT

Thomas played through a hip injury with the Celtics in 2017. The team then traded Thomas and he never regained full health, eventually winding up out of the NBA by 2022. Thomas claims Celtics doctors didn’t tell him of the long-term risks of playing through the injury. He also advised Williams to be wary of team doctors.

Fans are finding that message especially prescient after the latest news.

It is amazing that players still believe anything the Celtics team doctors say after what Happened to Isaiah Thomas.

Williams might want to get on the phone with Isaiah Thomas and have a conversation.

Celtics have the worst training staff/doctors in the league they be running guys careers into the ground smh hope he’s ight he probably shouldn’t have played in the playoffs same happened to isaiah Thomas’s hip it’s supposed to not be able to get worse https://t.co/iyPkxwyZVv

Hopefully, Williams is able to make a full recovery and return to his spot as one of the league’s best defenders.