IndyCar Driver Alexander Rossi Explains What Sneezing At 225 MPH Is Like, Calls It ‘A Wild Experience’ 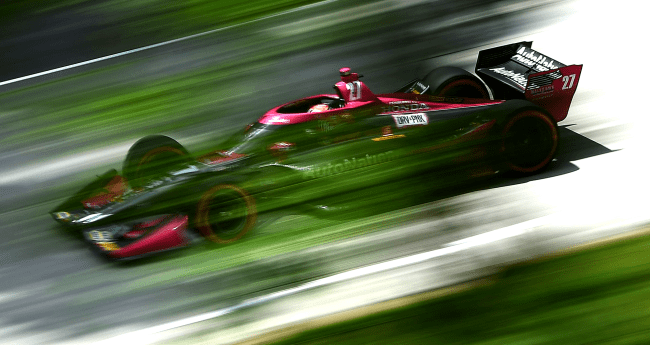 In the leadup to the the start to the 2021 IndyCar season this weekend, Andretti Autosport driver Alexander Rossi was answering several young kids’ questions when one of them, 7-year-old Logan, holding nothing back, asked Rossi how he picks his nose with his helmet on while racing?

“How do you pick your nose? You just do it. Like, no one’s going to see you,” said Rossi. Good point.

Rossi then explained that he isn’t actually sure he’s ever picked his nose while racing, but he has definitely scratched it, especially under a caution.

That explanation then led to Rossi recalling the time he sneezed in his helmet while going 225 mph during the Indy 500.

“I did sneeze once at Indianapolis, and that was a wild experience. Like, I sneezed going down the front straightaway. And it was kind of weird because the car moved around,” said Rossi. “I closed my eyes. It came out of nowhere because I would have tried to hold it in otherwise. I don’t know if it was allergy season, but like, yeah, I was just driving along, and it was just this massive sneeze. And then, that was fine, but then when you open your eyes again, it’s, like, weird. It was a weird, it took a half-second to refocus.”

Race car drivers, especially open cockpit race car drivers like those in the Indycar series, are just a different breed than the rest of us.

Another IndyCar driver, Josef Newgarden, also answered several kids’ questions including one young lady who asked him what he was going to put in his “new garden.” Get it?

Daffodils, and maybe some roses, he replied.

The 2021 IndyCar season kicks off on April 18 with the Honda Indy Grand Prix of Alabama and will feature 7-time NASCAR champion Jimmie Johnson making the move over to open-wheel racing for Chip Ganassi Racing.