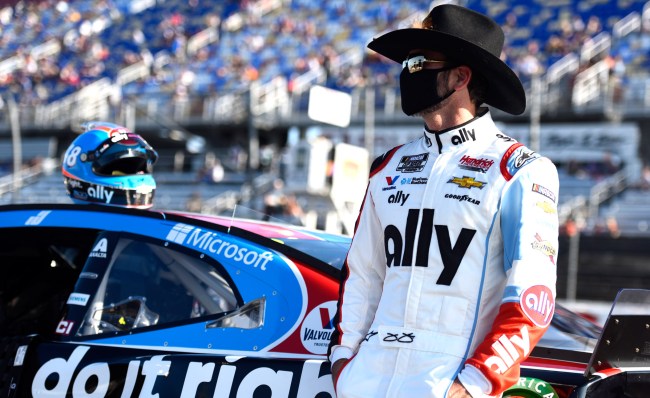 In a move that many fans didn’t see coming, 7-time NASCAR champion Jimmie Johnson has announced he will be moving to the IndyCar Series in 2021 and 2022 and will be competing for Chip Ganassi Racing.

Johnson, who has already announced the 2020 NASCAR will be his last full season in the series, will end his stock car racing career tied with Dale Earnhardt and Richard Petty for most NASCAR Cup Series championships.

“I will be soaking up the next nine weeks of my full time @NASCAR career. I’m sad to see it coming to an end but I’m excited to announce a future partnership with @CGRTeams in @IndyCar,” Johnson wrote on social media on Wednesday.

I will be soaking up the next nine weeks of my full time @NASCAR career. I’m sad to see it coming to an end but I’m excited to announce a future partnership with @chipganassiracing in @IndyCar.

The Associated Press reports Johnson and the Ganassi organization are currently working to finalize sponsorship for for Johnson to run the road and street course races on the 2021 and 2022 IndyCar schedule.

The 45-year-old NASCAR star tested an Indy car at Indianapolis Motor Speedway with Ganassi in July.

“To pair Jimmie with the likes of Scott Dixon is quite an opportunity. They are truly in rarified air and I think everyone knows by now that I like winners,” said team owner Chip Ganassi. “The goal right now is for us to run Jimmie in an Indy car for at least the next couple of seasons, and we want to show people we’re serious about the program. We felt it was important to get the partnership done and start putting the financial building blocks in place to make this a reality.”

“It only lit the fire more. I want to do this more than ever before,” Johnson told The Associated Press about the test. “It was something new, something different. NASCAR has been so good to me and I am so proud of the success I’ve had. But to try something new, man, this was really cool.”

“He was very impressive. There was no trying to do too much,” his future Ganassi teammate Scott Dixon told The AP. “He was texting me last night, asking me all sorts of questions, if there were tricks for getting out of the pits, how to handle a turn, those kind of things. He was just super amped up and just excited to finally get there.”

On the move: Seven-time NASCAR champion @JimmieJohnson will team with Ganassi for a 2-year IndyCar program.

Johnson also may run select NASCAR races for Ganassi over the next two seasons as the team already fields two cars in the Cup Series and may add some sports car events to his schedule as well.