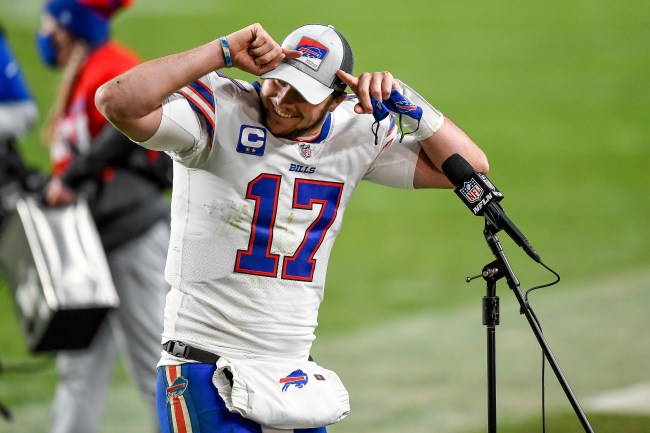 The Buffalo Bills clinched the AFC East title for the first since 1995 on Saturday and Bills fans are pretty stoked about it.

On Saturday night, thousands of Bills fans showed up to the airport to greet the team late at night.

The Buffalo Bills’ plane landed in Western New York shortly after 1:30 a.m., and the team was greeted by thousands of adoring fans at the airport in what has become something of a new tradition.

The players were greeted with loud cheers and chants of “Super Bowl, Super Bowl.” Quarterback Josh Allen was met with chants of “MVP, MVP.”

Other Bills fans celebrated the AFC East title win by uploading videos of themselves jumping through tables.

BURNING THE CITY TO THE GROUND, ONE TABLE AT A TIME pic.twitter.com/w5OCnZQXPy

Party like it’s 1995. Josh Allen I love you with my whole heart. #BillsMafia @barstoolsports @BuffaloBills pic.twitter.com/NvQ8JKC58O

Mark Schlereth did say tables were going to be smashed pic.twitter.com/WlVruV1gsy

Had to be done. AFC EAST CHAMPS! #GoBills #BillsMafia pic.twitter.com/p6Bwxq51Y6