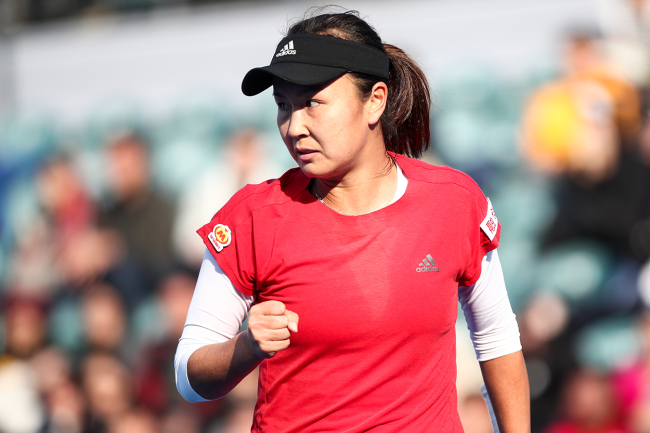 Peng Shuai is one of the world’s best tennis players. The Chinese-native has been ranked as high as No. 1 in women’s doubles, won both Wimbledon and the French Open in doubles, and reached the semifinal of the 2014 US Open in singles.

Now she has gone missing.

A few weeks ago, on November 2nd, the 35-year-old wrote a lengthy post on social media that accused former vice premier and member of the ruling Communist Party’s Politburo Standing Committee of forcing her to have sex with him against her will.

The post was removed from her from her verified account on Weibo, a leading social media platform in China, within 20 minutes. Additionally, the country’s state-controlled media has suppressed all reporting about Peng’s allegations.

A complete English translation of Peng Shuai’s deleted post. We owe it to her to read her full story in her own words #WhereIsPengShuai pic.twitter.com/yGNkd07j6a

China denies knowing about the allegations and since the post was removed, nobody has seen or heard from Peng— until today, allegedly.

On Thursday morning, the CGTN posted an email that it claimed was “from” Peng Shuai. The email, however, is most likely not real.

CGTN is the international arm of Chinese state broadcaster CCTV. CGTN is among the many tools that the ruling Communist Party uses to sway foreign opinion.

It has been sanctioned on numerous occasions by British TV regulator Ofcom and is widely regarded as a propaganda-based network.

Here is the reported email:

The email almost certainly falls under the propaganda umbrella. CGTN claims that the email is real and that Peng Shuai is resting at home.

However, for her to be simply resting at home without saying or doing anything for 16 days, immediately after she posted something that accused a top political leader of sexual assault is a tough sell. “Everything is fine” is almost exactly what someone would say if everything was not fine.

In this instance, silence from Peng Shuai may have been more reassuring than an email like this. And the CEO of the Women’s Tennis Association isn’t buying it.

New: WTA CEO Steve Simon reacts to this statement released by Chinese state media, saying it “only raises my concerns as to her safety and whereabouts.”

“I have a hard time believing that Peng Shuai actually wrote the email we received,” Simon said. pic.twitter.com/3GSjCzeV4h

Fortunately, this story has quickly gained traction, especially after the email. Tweets have flooded in with the #WhereIsPengShuai from tennis stars, athletes and celebrities across the world.

I am devastated and shocked to hear about the news of my peer, Peng Shuai. I hope she is safe and found as soon as possible. This must be investigated and we must not stay silent. Sending love to her and her family during this incredibly difficult time. #whereispengshuai pic.twitter.com/GZG3zLTSC6

We want to know.

We need to know. #WhereIsPengShuai pic.twitter.com/TSlUL4Xst7

Even the WTA has joined in on the growing movement.

This entire situation is terrifying and there is no way to know the truth about Peng Shuai’s health and whereabouts. Until she makes a public statement, her safety is a concern.