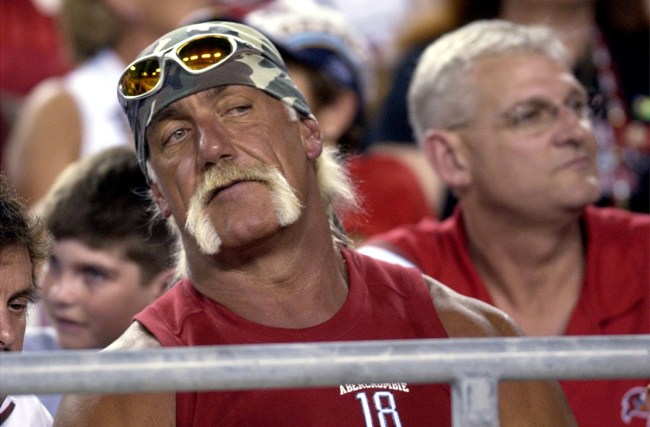 For some reason, Hulk Hogan was a guest at the Tampa Bay Buccaneers training camp on Tuesday. Which, yes, despite him being a diehard Tampa bro still seems a little odd considering his recent history.

Throw in the fact that Hogan posed for a photo with the Bucs franchise quarterback Jameis Winston, who himself has had some issues like being suspended for the first three games of the regular season for violating the NFL’s personal conduct policy, and it’s even more of a head-scratcher.

Maybe they were comparing notes with Hogan telling Winston how to make a proper comeback from his suspension…brother.

The NFL “concluded that Winston violated the personal conduct policy by touching the driver in an inappropriate and sexual manner without her consent and that disciplinary action was necessary and appropriate.” As part of of his discipline, Winston is required to obtain a clinical evaluation and fully cooperate in any recommended program of therapeutic intervention.

“A failure either to obtain the evaluation or to cooperate with treatment will result in further discipline,” the league said in a statement. “In addition, a future violation of the personal conduct policy will result in more substantial discipline, including a potential ban from the NFL.”

Just met with the @WWE Superstars and on all levels the volume of love and support was overwhelming. I’ve been praying for this day and I finally feel like I made it back home. Only Love 4 the #WWEUNIVERSE brother HH

Much of the internet’s reaction went something like this tweet which reads, “Did nobody in Buccaneers PR department think hey this is a bad idea?”

Did nobody in Buccaneers PR department think hey this is a bad idea?

Jameis Winston and Hulk Hogan in the same photo, what could possibly go wrong

Two good guys with no bad things in their past!

Plus, of course, a lot of reaction GIFs like these…

this joke writes itself

One does have to wonder what these two could possibly have been discussing.

Hulk: “My daughter would love you.”

Oh, this has a chance to be meme of the year…