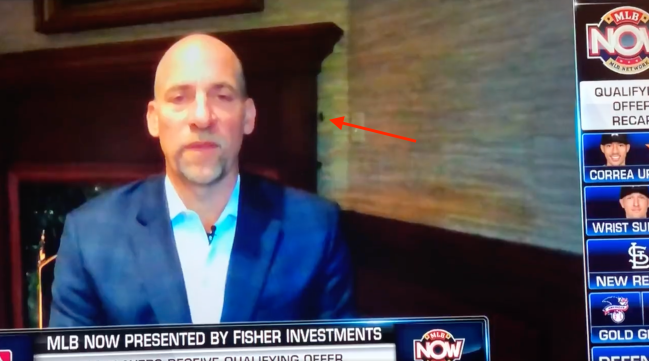 Eight-time MLB All Star John Smoltz has quite the resume. Not only does he have a Cy Young Award and World Series ring to his name, but he made bank while playing in The Bigs, is a very good golfer, and gets paid handsomely to talk about baseball both for Fox Sports and MLB Network.

With his gobloads money, he should hire an exterminator.

During a Monday night broadcast of MLB Now, Smoltz sat in what appears to be his living room and discussed the 44 MLB players who received qualifying offers from their clubs. While filming his live hit, something began to crawl up his wall behind him.

Smoltz did not appear to notice, nor did he break character, but it was hard to miss. A fairly small, black dot began to shimmy its way up the wall, eventually making its way onto the top of the mantle.

What the heck is crawling up John Smoltz’s wall?!! pic.twitter.com/Q68vjjG8hd

Though Smoltz did not comment on the gross thing that was making its way up his wall, the internet sure did. In response to the grotesque crawling creature, the debate immediately began as to what it was.

The general consensus was that it was either a cockroach or a mouse.

aren’t there some large-ass bugs in the South, including Georgia (which I believe he still resides in)? I just assume it’s officially a Large-Ass Southern Bug.

really looks like a mouse but that defies mouse behavior

looks like a cockroach or as they call them in Florida, “palmetto bugs”

It’s a roach. They’re quite big in the South. When it starts to get cold, the Apex-Predator roaches come out to find warmth.

It’s a roach. They’re quite big in the South. When it starts to get cold, the Apex-Predator roaches come out to find warmth.

It’s moving more like a mouse than a bug

Here’s the thing. It looks like a mouse that is trying to go unnoticed.

But it doesn’t resemble a mouse and thus, I’m going roach. I would like to lock in my answer.

Either way, whatever it is, Marmaduke should get the exterminator on the phone ASAP.