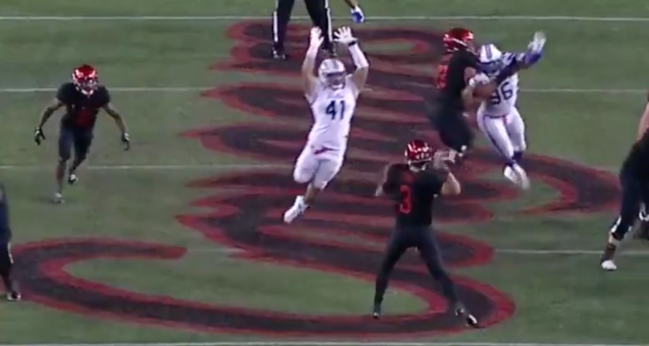 SMU linebacker Isaac Slade-Matautia made the most athletic defensive play of of the season, if not all time, on Saturday. Slade-Matautia, who transferred from Oregon, leaped over a block, stayed on his feet, and elevated into the air to block a pass.

As a redshirt junior for the Mustangs, Slade-Matautia has recorded 18 tackles and two interceptions in the last seven games. While his stats may not jump out on a stat-sheet, the 6-foot-1, 235-pound Hawaii-native’s presence on the second level is invaluable.

During the fourth quarter of Saturday’s game against Houston, he made an incredible play in a crucial moment. Cougars quarterback Clayton Tune dropped back in the pocket and looked to pass.

As the offensive line pushed down, Slade-Matautia had an open look at the backfield. Only running back Ta’Zhawn Henry stood in his way.

That was no problem. Slade-Matautia straight-up hurdled him.

Henry is 5-foot-7 and crouched to absorb the crashing linebacker. However, as Slade-Matautia went to go over the top, Henry stood up and tried to jump up to make a block.

Thus, Slade-Matautia jumped at least five feet in the air. 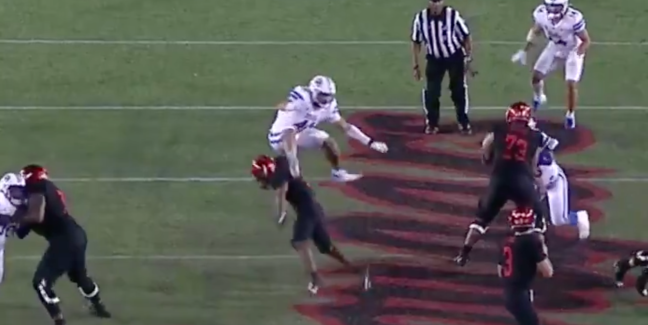 To make things even crazier, he landed on two feet, took two steps and then jumped just as high to swat down the pass attempt.

Here is the play in full:

As could be expected with such an unbelievable effort, football fans lost their minds. Here is how they reacted to Slade-Matautia’s athleticism:

Isaac Slade-Matautia just made a wow play. Leaped over the RB attempting to block him and then jumped in front of Tune to bat the pass down. SMU gets a much-needed stop.

Slade-Matautia with the hurdle on defense 😳😳

Isaac Slade-Matautia just jumped 8 feet in the air lol. What is Henry supposed to do? Outstanding play to force a Houston punt

Although SMU ended up losing its first game of the season, Slade Matautia’s freak defensive play will go down in history. Unreal.