People Behind The Parodies: A Chat With The Creator Of The Popular ‘NotSportsCenter’ Twitter 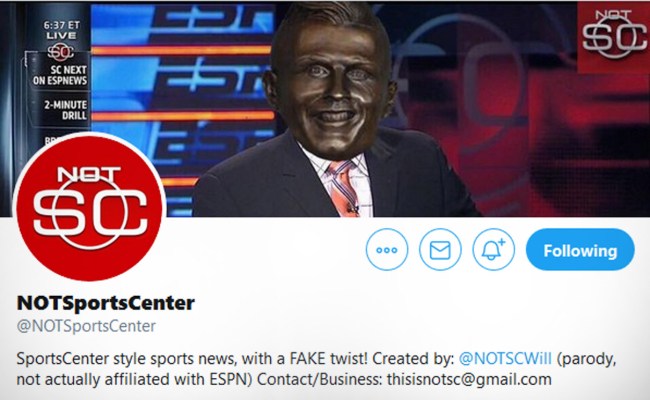 Welcome to People Behind The Parodies, a recently added feature where we will be interviewing and going behind the scenes with the owners and operators of some of the most followed and most entertaining parody Twitter accounts on the internet.

“SportsCenter style sports news, with a FAKE twist!” reads the description of the account, which has become one of the most-followed sports parody Twitter accounts on the web with, as of this writing, almost 600,000 followers.

Andy Dalton’s family has taken to the streets after his release from the Bengals pic.twitter.com/rNj9e8yEwB

First, how about a little background?

Tell me a little about yourself – as much or as little as you would like to share.

What’s your real name? How old are you? Where did you grow up? Where do you live now?

Will Applebee. I’m 38 years old (I don’t really believe it at times, at least until after I go running and have eight different body parts start hurting), I started NOTSC when I was 29 in Orlando and now I’ve had it so long I’ve outgrown the ideal age group for it which is weird for me.

I grew up in Orlando, went to undergrad at Florida State, got my masters in sports business and JD from FSU also. I moved to Chicago in 2017 because I’ve always loved the city and just so happen to be a Chicago sports fan (the two are probably more correlated than I like to admit).

Excellent. So you’re a lawyer then?

I was. Haven’t practiced in seven years now.

Practiced on ESPN’s face a few years ago but outside of that, nothing.

I swear I didn't write this headline lmao incredible https://t.co/yHkD3W7eEQ

What field of law were in, if I may ask?

What possessed you to think “I’m going to start up a parody Twitter account about SportsCenter? Was there an “I need to this now” moment?

It was that Onion SportsDome Show in 2011…it was so bad that a girl I used to host a podcast with texted me “you could write better stuff than this” during the premiere episode and I started it that night.

Had no idea it would become what it has…took me 6 months just to get 500 followers initially which seems insane now with nearly 600K.

What do your friends and family think of it and how big its become?

My parents love that I’ve made a business out of it with all my other accounts, but this is probably my favorite family moment…

My grandfather asking about NOTSC: "How's your texting thing doing?"
Me: "Up to 233,000 followers."
My grandfather: "OMG it keeps going up!"

One of my best friends has told several people he knows me and none of them believe him which always cracks me up.

I do. It was a mock SC tweet about digging through Brett Favre’s (tells you how long I’ve been doing this) trash.

Brett Favre took out the trash in Hattiesburg today. Was there a surprise clue about his future inside? Ed Werder has details #SportsCenter

Has anyone ever gotten mad at you for mocking them?

I got legit death threats over a Cowboys joke once (guy made three separate accounts to attack me) which is one of the reasons I try to stay semi-anonymous, although the ESPN story got my name out there which I’m fine with.

Is there a line you try to not cross?

Yeah, I really try to dance on the line of what’s appropriate without falling over it. There are certain jokes I’ve made in the past (like about the WNBA, one about a college team scheduling a school for the deaf) that I probably wouldn’t make now because we live in a much more sensitive society, but I’m always mindful about not being just straight up crass.

I’ve had others go bigger since, but I would pick this one honestly because it’s where Ireally started to take off. It gained me 5,000 followers in three days because Peyton Manning’s name trended all week and it was a top tweet on several trends (this was back in the days of that).

BREAKING NEWS: Peyton Manning and the #Colts to part ways, as Indy becomes first in #NFL history to release their entire team all at once

Have any other favorite or most memorable tweets?

This one is definitely towards the top of that list because when LeBron hit his second game winner of the playoffs they actually did for #SCTop10 what I tweeted as a joke for the first one and I couldn’t stop laughing.

I have wayyyy too many accounts now (it’s in the double digits and that doesn’t even include the other networks…) but the three I’d recommend most are:

@SomeonesAnIdiot which I started to make fun of my mentions and it morphed into an account about mistakes/bloopers, @OldSocialPosts I use to post and meme the old tweets that are always circulating and ones I find on my own, and @BadSportsRefs I co-own with [the owner of] @OldTakesExposed where we make fun of all the horrific officiating.

The ones I read, sportswise, it’s usually about my teams (FSU/Cubs/Bears/Bulls) and otherwise it’s usually laughing at the same viral insanity as everyone else.

Only thing I would add is I don’t like tooting my own horn except about my legal win over ESPN, I’ll talk about that all day, haha. I did a whole behind the scenes thread on it.

One year ago today, my favorite legal decision of all time was announced: my win over ESPN.

I’m going to celebrate it today with some behind the scenes details of the ordeal in this thread.

If you’d like to read the entire decision you can find it here: https://t.co/Bq7a0EtBJP pic.twitter.com/5q9Gd5Npna

I literally trolled ESPN’s lawyer in the legal briefs I had to write… enjoyed that way too much.

Awesome. Thanks a lot for doing this. 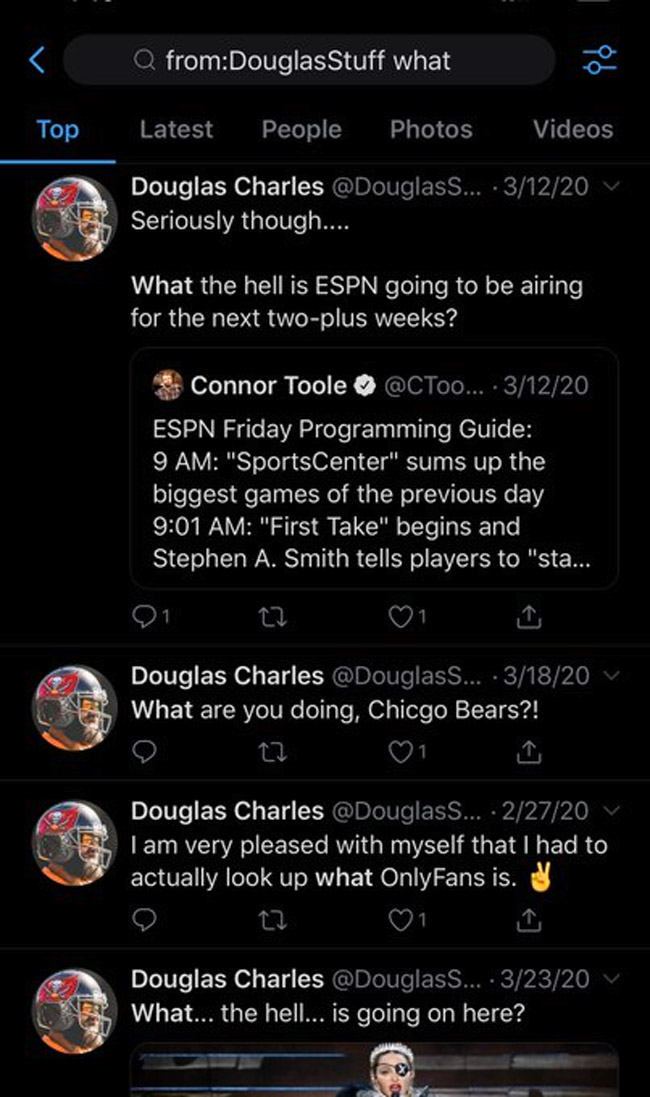 Previously… People Behind The Parodies: An Interview With The Creator Of The Popular ‘Stephen A. Smith Burner’ Twitter