People Behind The Parodies: An Interview With The Creator Of The Popular ‘Stephen A. Smith Burner’ Twitter 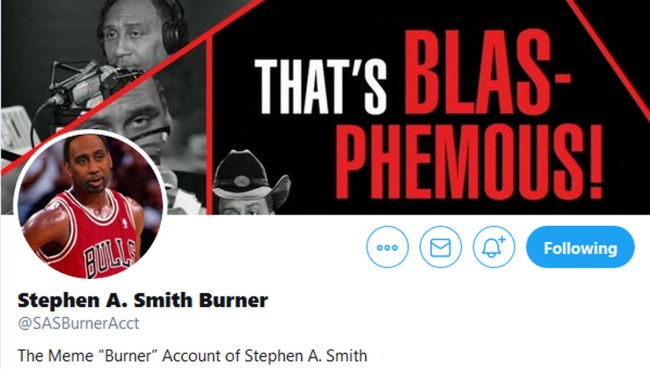 Welcome to a new feature we’re debuting today, People Behind The Parodies, where we will be interviewing, and going behind the scenes with the owners and operators of some of the most followed and most entertaining parody Twitter accounts on the web.

“The Meme ‘Burner’ Account of Stephen A. Smith” hasn’t been around very long, but it’s rapidly become one of the most popular parody Twitter accounts out there with, as of this writing, almost 400,000 followers.

First up, a little background, can you tell me how old you are?

Fair enough. Do your friends and/or family know that you run @SASBurnerAcct?

Just my closest ones. No more than 10 people.

What do they think about it? Do they get a kick out of your tweets?

Yeah, they are SAS fans too. They think it’s hilarious and are impressed with the account’s growth.

Nice. How long have you been doing this?

Before I was the Stephen A Burner I was a depressed Bears fan account and I had like two Stephen A memes that I really liked.

I can relate. Do you remember your first tweet for @SASBurnerAcct?

Hmm… Honestly I couldn’t tell ya. I more started off just commenting under BR (Bleacher Report) and ESPN tweets and celebrities.

First day I started I went from 700 followers to like 1,800. Then I was gaining like 3K a day for two months. Nothing popped it, it was very consistent.

Has anyone ever gotten mad at you for mocking Stephen A? Has he or his reps ever said anything to you?

So it’s all good so far.

Have any of your tweets caused any controversy or made you wish you hadn’t posted it?

Honestly not really. I’ve had a couple jokes that were “dark” but no controversy.

Related, have you ever deleted a tweet or been forced to because of what you said?

I mean yeah, I’ve deleted tweets, not because it was bad. More because I had a typo or I just realized after posting it wasn’t as funny as I initially thought. [There’s] not much that people would tell me you have to delete this. I try and keep my tweets ethical but still humorous. I am imperfect though.

Just a few more… Is there a line you try to not cross when tweeting? As in, things you WON’T do or say in the name of humor? Like, do you stay away from personal stuff and just “stick to sports?”

Worse swear word I’ll say is damn and I never really get into personal stuff.

Yeah, he’s aware. Not accurately, but he knows.

How did you find that out?

He’s quoted a couple of my tweets and mentioned me twice when doing a Q&A.

What do you mean by “Not accurately but he knows” about the account?

That’s actually pretty funny. And very Stephen A of him. Do you have any favorite or most memorable tweets?

Every day I laugh and make memes. I wouldn’t say I have a favorite I have many. This is my favorite edit though.

Haha. Any ballpark idea what the most likes or retweets you got for one post was?

Do you recall what it was about?

It was with that video. Back in January.

Bleacher Report and Stephen A.

Made this for him, but he never acknowledged it.

We’ll have to work on that.

This 30 for 30 trailer is my favorite post. It got like 50K likes I think, but I love this one. Even though it’s not necessarily funny.