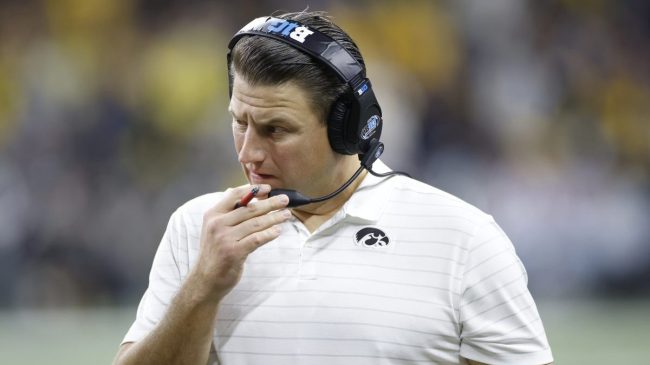 The Iowa Hawkeyes’ offense is an abject disaster.

In fact, the Hawkeyes have been a disaster on offense for the majority of head coach Kirk Ferentz’s storied tenure. Usually, however, their offensive ineptitude is covered up by elite defense and special teams units.

That doesn’t appear to be the case this year.

Iowa has scored fewer points in its first two games than it has punts.

Through two games in 2022, Iowa’s 7.0 points per game ranks dead last in the country, and Hawkeyes fans have had enough.

Ferentz has come under a lot of scrutiny from both fans and the media. So one fan decided that he needed a bit of a pick-me-up. They got him just that in the form of a Cameo video from former Oklahoma Sooners coach Bob Stoops.

But nobody seemed to tell Stoops who exactly the Cameo was for. The results, as you can imagine, were incredible.

So someone set up Bob Stoops on cameo… pic.twitter.com/Cg3fR2CqEG