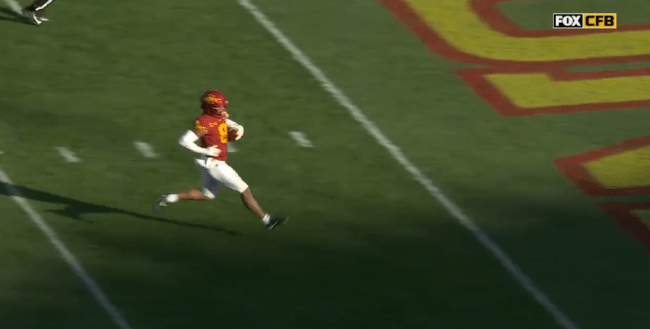 Anti-taunting rules are getting out of control in both the pros and in the college ranks of football.

On Saturday, during the Iowa State Cyclones game against the Oklahoma State Cowboys, wide receiver Xavier Hutchinson caught a long TD pass and celebrated by high-stepping while on his way into the end zone. Refs decided that his celebration was considered “taunting,” According to college football rules, the football was to be negated and called back.

There is no worse rule in football and perhaps all of sports. It’s pathetic. And if you’re in agreement with it, you hate fun. pic.twitter.com/eShLaNZ3lq

Fans were furious at the call and blasted the refs and the NCAA.

Ok guys. I know we often say "this is the worst call of all time" … Well we found it. This was called back for taunting. pic.twitter.com/QH5kM9RdW5