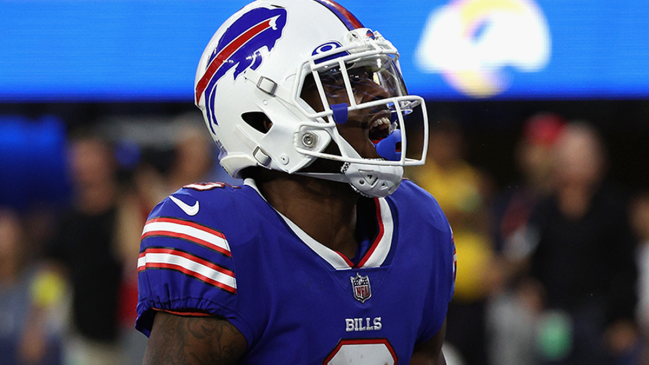 The Buffalo Bills kicked off their season with a bang by walking away with a dominant win over the Rams in Los Angeles on Thursday night in a game where Josh Allen spread the wealth by throwing a touchdown to three different receivers (in addition to the rushing TD where he took matters into his own hands).

Isaiah McKenzie was the second wideout to get in on the action when he posted what was technically the game-winning score midway through the third quarter after snagging a short pass from Allen before making his way into the end zone to give the Bills a 17-10 lead they never looked back from.

McKenzie opted for a fairly subdued celebration following the eighth touchdown of his NFL career, as he handed the ball off to Dion Dawkins to give the offensive tackle a chance to show off his spiking skills. However, he took advantage of the opportunity to address the camera that was focused on him as he made his way to the sidelines by yelling “It’s a boy!” a couple of times.

You could be forgiven for overlooking that particular moment or missing it entirely, but there was one person who was watching very closely: McKenzie’s sister, who is expecting a child she discovered the gender of for the very first time courtesy of her brother’s celebration.

Prior to seeing this, I would’ve argued that elaborate gender reveals—which are literally ruining the world and have directly contributed to the deaths of multiple people—are wildly unnecessary ceremonies that can’t go away soon enough. I still feel the exact same way, but that’s only because there’s no way anyone will ever be able to top what McKenzie managed to orchestrate on Thursday.

Pack it in, every single person who’s expecting a child from now until the end of time. There’s no way you’re doing anything cooler than this.