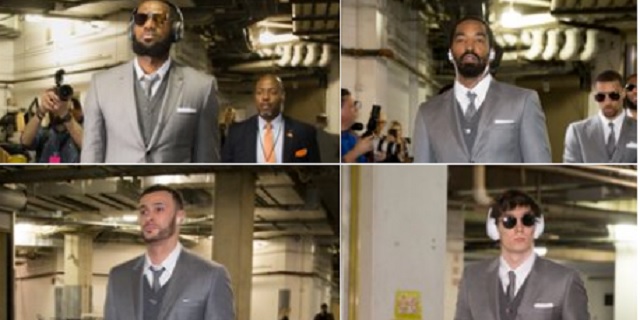 Before tonight’s game 3 of the Cavs-Pacers series, the entire 15-man roster for the Cavs arrived at Bankers Life Fieldhouse wearing the exact same suits made by designer Thom Browne. Apparently the suits were gift from LeBron James to his teammates.

The suits made by designer Thom Browne are the Classic Medium Grey Suit in Super 120’s twill. The uniform outfits also featured a white oxford shirt, a gray tie and a gray cashmere cardigan sweater. Players were also given black leather boots, overcoats and bags from Thom Browne.

It has been James’ custom to give out gifts to his teammates in the postseason. Before the 2015 NBA Finals, he passed out Beats by Dre headphones, Apple Watches and Samsung Edge phones. James had business relationships with both Apple (which owns Beats by Dre) and Samsung at the time.

A team source told ESPN.com that the Cavs were fitted by tailors in Cleveland several weeks ago and all of the players packed the suits for the trip to Indiana.

Apparently LeBron had this planned for awhile because former Cavs guard Isaiah Thomas, who was traded by the team months ago called out LeBron for not sending him a suit he was fitted for on social media.

LMAO at Isaiah Thomas’ comment on the pic of the Cavs. 😂😂#PettyWarz @World_Wide_Wob pic.twitter.com/m4YYcw6HAL

Despite Thomas’s claim, sideline reporter Lisa Salter said players were fitted for the custom suits a few weeks ago. Hopefully LeBron sends IT his suit before the playoffs are over.