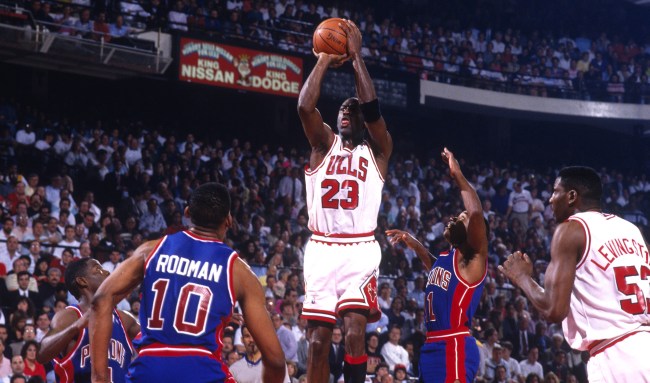 I think many will agree that one of the best parts of The Last Dance was when Michael Jordan called Isiah Thomas an asshole and didn’t buy his excuse for not shaking hands with him and his Chicago Bulls teammates after losing in the playoffs.

During the documentary, Thomas tried to claim it wasn’t customary for players in the 80s and 90s to shake hands after games. Jordan wasn’t having it.

Fast forward to this week and during Tuesday’s episode of Club Shay Shay, Shannon Sharpe’s podcast, Thomas dubiously claims that until he watched The Last Dance, he had no idea that Jordan hated him.

“It seems like it was only one person that had a problem [with me on the Dream Team], and that was Jordan,” Thomas told Sharpe. “Until I watched The Last Dance, I didn’t realize MJ felt that way about me.”

Thomas also claimed during his interview with Sharpe that he didn’t consider Michael Jordan to be his competition back in the day.

“Just head-to-head, I was dominant over him,” said Thomas. “Until ’91 when I basically had career-ending wrist surgery, up until then, my record against him and his team — it really wasn’t competition there.”

Thomas added, “He just wasn’t my competition. My focus was Bird, Magic, Dr. J, Kareem Abdul-Jabbar. Those were the guys. I don’t care what anybody says. You can go back and look at history, those were the guys.”

“Head-to-head, I was dominant over Jordan. He just wasn't my competition. My focus was Bird, Magic, Dr. J, Kareem.” — @IsiahThomas pic.twitter.com/Ic82NR8Kpv

The former Pistons great also doubled down on his opinion that LeBron James, not Michael Jordan is the GOAT.

“It’s going to be hard for people to look back 10 years from now and say LeBron wasn’t the best.”

He also listed the top five toughest players he went up against, and once again, MJ was not really in the conversation.

Thomas and Jordan are just never going to get along.

Watch the entire interview below…