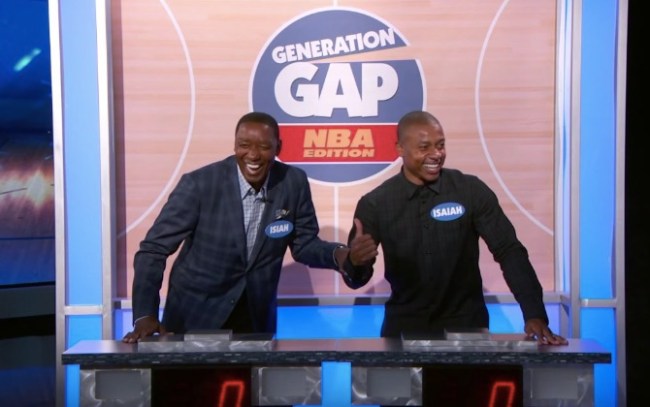 Two titans of industry squaring off in a battle of wits. On one side, we’ve got NBA legend Isiah Thomas who was a 12-time NBA All-Star for the Detroit Pistons. He was a member of the ‘Bad Boys’ who led the Pistons to back-to-back NBA championships in 1989 and 1990 and he was named the Finals MVP in 1990. On the other side of this battle, we’ve got the NBA All-Star Isaiah Thomas who was born in 1989 and who currently plays for the Lakers. He’s a 2-time NBA All-Star (2016, 2017) with an incredibly bright career ahead of him.

Last night, as guests on Jimmy Kimmel Live, the two men both named Isiah Thomas squared off in a game of ‘Generation Gap’ where they were each quizzed on generational trivia. If one of the Thomas’ was unable to answer the other Thomas was given the opportunity to steal the question. SPOILER ALERT: Isiah Thomas WINS:

“I’m like the Cavs, I’m gonna get swept.” — Isaiah Thomas

So, the younger Isaiah Thomas was named after the NBA legend Isiah Thomas because his dad lost a bet. As an LA Lakers fan, he lost the bet in 1989 that he’d name his son Isaiah Thomas if the Lakers lost to the Pistons in 1989. I can’t say that I’ve ever actually known of anyone who has been named after losing a bet until now.