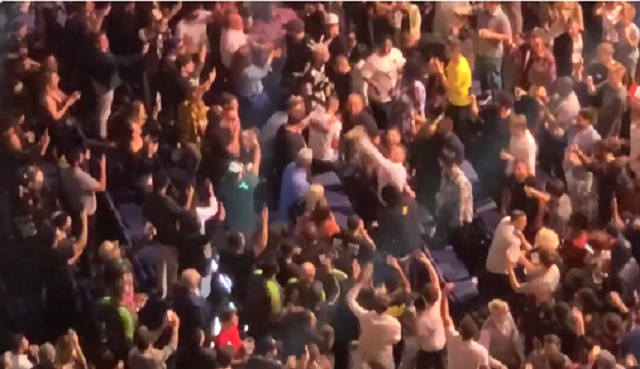 The Island Boys are getting serious heat these days.

The twins from Florida who became famous because of their Island Boy TikTok song did not get a warm reception at Saturday night’s Jake Paul-Tyron Woodley fight.

As soon as they entered the building, the brothers got loudly booed by fans at the Amalie Arena in Tampa.

Island Boys… not a lot of fans in Tampa. Getting booed out of the building. pic.twitter.com/c7vd3mW02v

The Island Boys eventually got into it with fans while sitting ringside, and people in the crowd started throwing drinks at them.

Someone threw a drink at the island Boys pic.twitter.com/bDujUGKM8C

A fan in the upper bowl threw a drink down at The Island Boys and a brawl nearly broke out. Cops told The Island Boys to sit down and “chill out” or else they’ll be removed from the arena. #PaulWoodley2 pic.twitter.com/iJZBDBas0i

Wait they only got yelled at by security they still here ….. THE ENTIRE BUILDING IS TRYI G TO FIGHT THEM. Never seen anything like this! – Island boys – #islandboys https://t.co/BVyoldhDNW