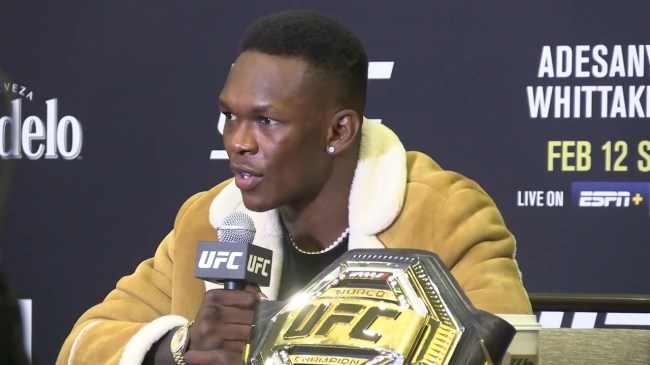 Earlier today, sports management firm Paradigm Sports announced that Israel Adesanya signed a new multi-fight deal with the UFC, making him “one of the top paid athletes in the history of mixed martial arts.”

Conor McGregor, who shared management with Adesanya, was quick to chime in with praise of The Last Stylebender on Twitter.

“Can’t wait to see Izzy Style (Israel Adesanya) back in the Octagon this weekend,” McGregor tweeted after the announcement. “One of the true remaining high-level fighter/performer athletes we have on the roster. Don’t just fight. Perform!”

Adesanya will fight Robert Whittaker for a second time this weekend at UFC 271.

Before the PPV fight at Houston’s Toyota Center, the defending middleweight champion answered questions from the press.

Adesanya spoke highly of his admiration for McGregor after a reporter brought up the Tweet.

“Real recognize real. We’re on the same team when it comes to Paradigm. Yeah, I think I’m in second place when it comes to the highest-paid fighter on the roster. Well, active right now,” Adesanya offered to reporters.

“Conor is a guy I’ve always admired from the jump… from the jump, when he fought Marcus Brimage.  “He’s a guy that… he’s a performer. When he said perform, I know what he means. We know. You don’t just fight. You perform. Look at the last fight with Whittaker… That was a rockstar concert. I gave a song and dance, the whole thing.”

“So, yeah. We understand the magnitude of stepping up in the main event. Not just showing off, but showing out. I appreciate Conor and what he’s done for the game. Whether you like him or not, he’s raised the bar. Even for you guys in here. The whole game is better because of him. Ronda Rousey did that in her time,” Adesanya continues.

“I look to raise the bar the same.”

Game respect game. Nothing but respect amongst UFC legends.

UFC 271: Adesanya vs. Whittaker II goes down on Saturday night, February 12 at the Toyota Center in Houston, Texas.