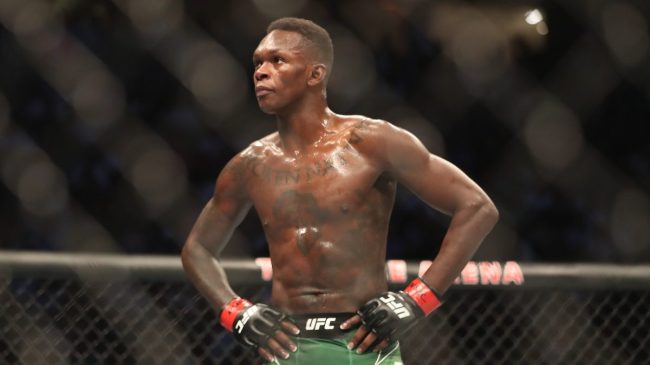 Israel Adesanya is set to take on challenger Alex Pereira for the Middleweight belt at UFC 281. It should be a spectacular bout, as Pereira has some serious potential and could be the toughest challenge for Adesanya so far.

However, the current champion is calling his inner Jigsaw, as he recreates a scene from the horror film Saw. Check out the clip below which also features a full 10-minute video of Israel Adesanya’s training methods.

In addition to recreating the scene from Saw, Adesanya wants everyone to think of his upcoming championship fight as a horror film, per MMA Media. The Middleweight champions claims, “it is going to be ‘bloody.'”

According to MMA Media, Israel Adesanya was asked “what the name of this horror movie would be?” He quickly responded with “A Quiet Place.”

🗣| Israel Adesanya when asked what the name of this horror movie would be:

Considering Adesanya is one of the most winningest UFC champions in history, he has all the right to say what he wants. This “horror movie” mindset is a gruesome attempt to rattle Alex Pereira. Even so, Pereira is a beast in his own right as he’s fighting for a belt after just seven professional bouts in his career.

This might be one of the ages, as we may finally have a suitable challenger for Israel Adesanya. However, we won’t know that until the main event takes place on Saturday night, November 12.