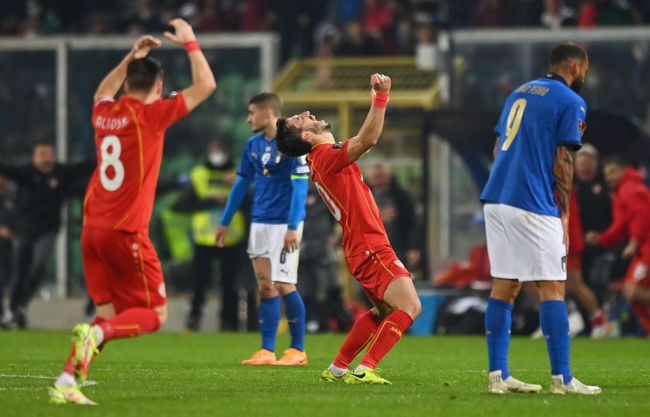 World football was absolutely stunned today during the playoff semifinals of UEFA’s World Cup qualifiers. The defending champions of the UEFA Euro, Italy, who had just won the competition in July, lost to North Macedonia and were eliminated from World Cup qualifying.

The game itself was a masterful defensive display from North Macedonia. They soaked up all of Italy’s attacking pressure and never seemed to bend. In spite of allowing Italy to have 65% of possession and North Macedonia never creating much of their own, there weren’t many times throughout the match where an Italy breakthrough seemed imminent.

It would turn out that the breakthrough was never coming for Italy. After spending most of the match defending, North Macedonia’s keeper sent a goal kick deep during stoppage time. North Macedonia’s Aleksandar Trajkovski came away with the ball in the ensuing scramble and positioned himself for a shot from the edge of the box.

He placed it perfectly in the corner at the far post and gave his team the lead with time ticking away.

UNBELIEVABLE UPSET! 🔥 The European Champions are OUT of the World Cup! 🇮🇹❌🏆#ITAMKD #WCQ
(Via: @ESPNFC)pic.twitter.com/I4V8QfPmz5

It is an absolutely incredible moment for North Macedonia, who have just secured one of the biggest upsets in world football history and a massive disappointment for Italy, who will now miss their second consecutive World Cup.

The most disappointing part of this result for Italy is that it is a possibility that could have easily been avoided by Italy months ago. They had a 90th minute penalty against Switzerland during the group stage of qualifying that would have guaranteed them a spot in the World Cup and Jorginho blew it.

They drew with Switzerland and followed it up with a draw against Northern Ireland. Those disappointing results put them two points behind Switzerland in the group and in this position to be eliminated.

North Macedonia will now have the opportunity to shock the world again as they move on to face Cristiano Ronaldo and Portugal on Tuesday with a spot in the World Cup on the line.

Meanwhile, Italy will once again find themselves wondering what went wrong as they begin preparing very early to defend their title at Euro 2024.