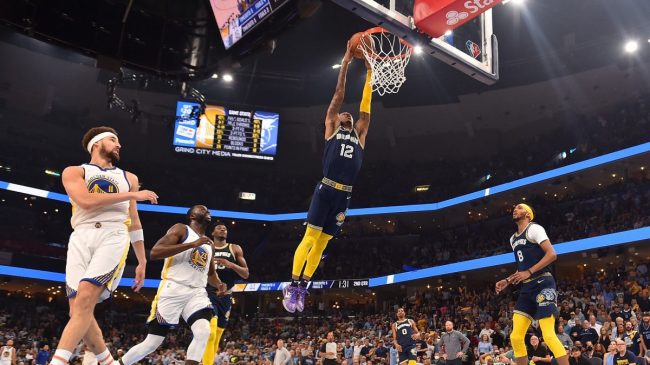 Ja Morant is one of the most entertaining basketball players to watch in the NBA. The youngster is exiting just his third professional season, but he’s already being hyped up as one of the league’s best.

Morant, a former first round selection out of Murray State, is fresh off an All-Star campaign that saw him lead the Grizzlies to the Western Conference Semifinals. Memphis would lose in six games to eventual NBA Champion Golden State, but they showed that they’ll be around for the time to come.

Morant is a big part of that.

Since joining the Grizzlies, the organization has seen consistent improvement. Win totals have increased each of the last three years, with this season’s 56-win team tying for the best in franchise history.

What makes Morant so dangerous is his tremendous athleticism. That athleticism shows on his ability to get to the rim, defend, and, of course, dunk. A recent viral video shows off his ridiculous hops, which has fans around the league begging for a chance to see Ja in the 2023 Dunk Contest.

Morant showed up to an Alabama high school this week to take a visit to the Dreamers Showcase. It was Ja that was putting on the show, though.

Ja is for the fans 👏

Morant is seen throwing down some insane dunks. That includes leaping over a player at the rim, easily clearing him for an impressive jam.

The performance had folks talking on social media.

Nah’ he really gat to be in dunk contest next season 😬🔥 https://t.co/wLSHTLfv3A

There were others that hilariously commented that the Grizzlies would be calling to tell him to calm down with the dunk show. Morant injured his knee in the playoff series against the Warriors, but he sure looks healthy now.

He finna get a call from his agent soon my boy to lit 😂😂 https://t.co/ECQMbVbtQB

Morant certainly looks healthy. It will be nice to see him back on the court next season. Maybe a Dunk Contest appearance is in his future.