Ja Morant Meets His ‘Son’ Ja-Raffe, Says He’ll Jump Over Him If He’s Ever In The Dunk Contest 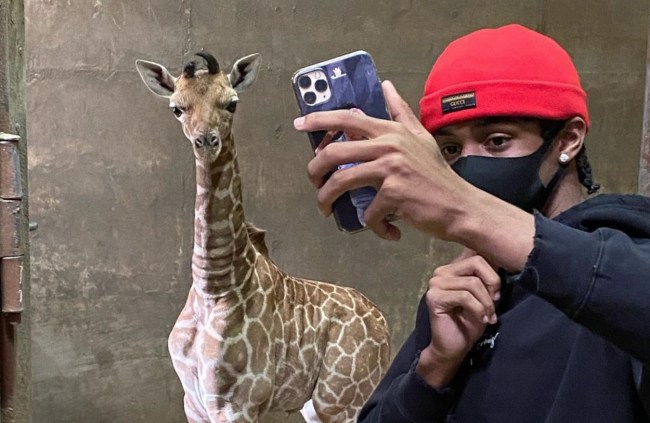 Ja Morant may have been named the NBA Rookie of the Year last season, but maybe the coolest thing to happen over the past year happened on Thursday when a baby giraffe born at the Memphis Zoo was named after Morant. The zoo cleverly went with the name ‘Ja Raffe.’

Morant got to go meet the giraffe on Friday and it was clear these two had an instant connection. Morant kept referring to Ja Raffe as his son and already revealed big plans he has for his baby boy.

“If I ever do the dunk contest, I’m going to take my son with me. I’m going to jump over him,” Morant said. Morant did an Instagram Live with the giraffe during the day as well and was even joking around asking if he was coming to the crib for Thanksgiving next week. Morant’s dad even got in there and booped his nose.

The average height of a giraffe is anywhere between 16.4 and 19.7 feet, so he may have a little trouble jumping over him. Maybe he can make dunk contest history though and ride in on his back or something, everyone would love to see it.

The @MemphisZoo named its new baby giraffe after the Grizzlies' 2020 NBA Rookie of the Year. pic.twitter.com/F2JpN72K1U