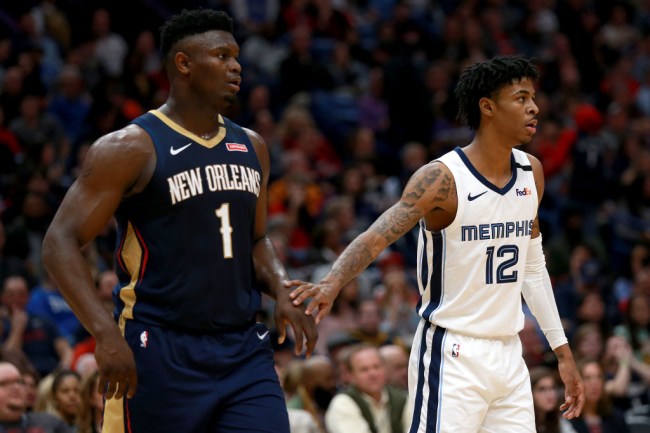 The entire sports world may be on pause at the moment, but that doesn’t mean we have to stop debating about super important things like the NBA Rookie of The Year race.

It’s only a two-man show with Zion Williamson and Ja Morant battling for the award, but according to the latest ESPN survey, it isn’t really much of a battle at all.

ESPN put together a straw poll and asked 70 voters to cast 1st, 2nd and 3rd place votes among a group of 10 rookies and all 70 voters gave the nod to Morant to take home Rooke of The Year honors. Williamson received 51 second-place votes while Miami’s Kendrick Nunn picked up 14 of his own.

These results may surprise a lot of people given how dominant Williamson has been in his 19 games played this season, but without one of the 70 voters handing him a single first-place vote, it’s clear that his abbreviated season is a huge factor in this puzzle.

The hype around the big man and the fact that Williamson is averaging 23.6 points and 6.8 rebounds per game could easily overshadow what Morant has done this year, but the Grizzlies point guard has been consistently putting up big-time numbers all season long.

In 59 games this season, the Murray State product is averaging 17.6 points, 3.5 rebounds and 6.9 assists per night to go along with 10 double-doubles and a triple-double. He’s burst onto the scene faster than anyone expected him to and not even the most optimistic Memphis fan would have ever imagined the Grizzlies to be in a playoff spot 65 games into the season, but here we are.

If Morant actually does go on to unanimously win the award he’d become just the fourth player to do so over the past 30 seasons. As for Williamson’s chances, no player has ever taken ROY honors when playing fewer than 50 games. If the NBA does resume and plays out a full 82-game season, Williamson would only be able to reach the 37-game mark if he played in every game.