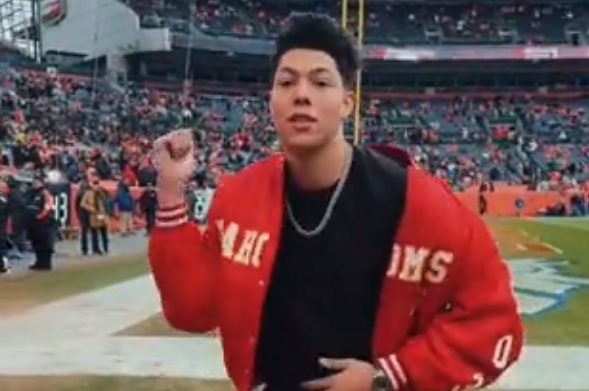 During the Chiefs’ game against the Broncos, Jackson got on the field and busted out his latest TikTok dance on the sidelines while wearing a jacket that appeared to be missing an “E” on it for whatever reason.

Does his jacket say MAHOMS??? 🤔

Jackson, who has gotten plenty of hate for his antics this season, was once again blasted by the Internet over his latest sideline TikTok dance.

How has some security guard not tackled him in the middle of a video? Or someone dump milk on his head? Or throw a football? Or something? https://t.co/OVBntgh04Z

We can’t be the only ones waiting for something big and heavy to fall on this dude, right? https://t.co/cxEDNJJMxl

And with this, it becomes official:

If Goodell bans this guy from every NFL stadium, I’m willing to forgive all his mistakes as commissioner https://t.co/b7snN9pT6C

I think I hate the Chiefs more than any other team in sports right now for no other reason than Jackson Mahomes. https://t.co/qGYX7c1p6x

Can we please send Jackson Mahomes and Christian Walker to Antarctica? https://t.co/g01xF2FNC0

I’ve never seen an athletes sibling (who has no relevance in sports) make me dislike a team so much than Jackson has done for the Chiefs 😂 https://t.co/jyLtCuq25g