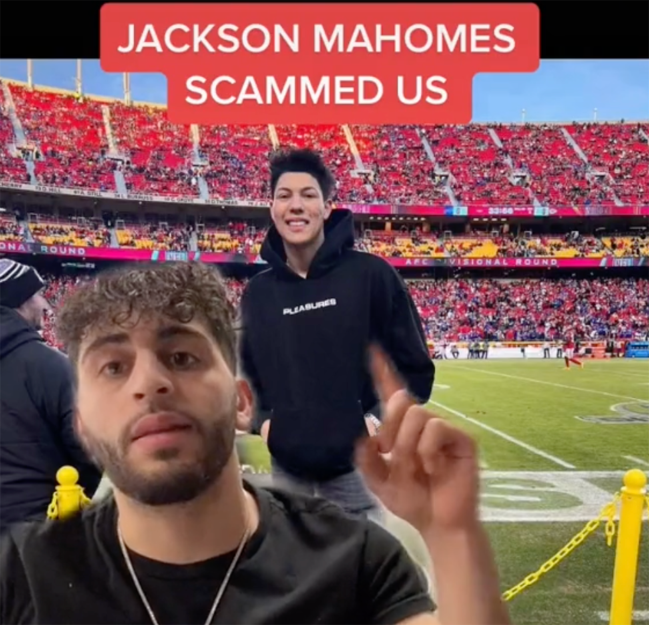 Jackson Mahomes is being called out, again. The brother of Chiefs quarterback Patrick Mahomes allegedly scammed a company and is being exposed on TikTok.

Rare Munchiez, an online wholesale marketplace, calls itself the “home of the exotic drinks and rare snacks.” Their business concept is simple and they have positioned themselves well in a unique market.

Rare Munchiez sells snacks, drinks, candy and cereals that aren’t easily available at a grocery store or even on the internet. Their products include anything from giant skittles, to Japanese Cheetos, to pina colada flavored Schweppes.

According to the company, Mahomes reached out for some free product but ended up scamming them. Rare Munchiez exposed him in a recent TikTok video.

The company agreed to send Mahomes a care package, but with very clear terms. Once Mahomes received the package, he was asked to plug Rare Munchiez on social media.

He said that he would, according to screenshots of a conversation that were included in the TikTok video. In turn, Rare Munchiez sent him a care package.

When the company asked Mahomes if he had received the package, they did not get a reply. They continued to follow up with Mahomes and he continuously left them on read without responding.

Thus, after presumably receiving the package from Rare Munchiez, Mahomes did not follow up on his end of the deal. He did not post on Instagram, nor did he tag the company.

Here is the full video in which Mahomes get exposed for his alleged scam:

If true, which it looks like it is based on everything that Rare Munchiez presented, it is a terrible look for Mahomes… again.