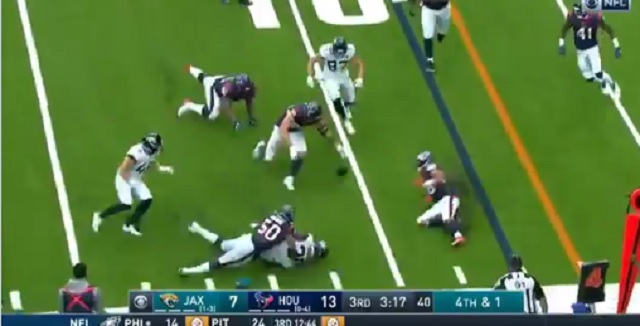 One play on Sunday perfectly summarized the Jacksonville Jaguars season.

During today’s Jaguarss-Texans game, the Jags went for it on 4th-and-1 in the redzone instead of kicking a field goal and tried to run wildcat play that ended terribly.

Shades of the Chris Brown attempted halfback pass in the Kubiak era pic.twitter.com/Kxu1aj5pJ8

The play ended up being the Texans first turnover of the season.

Stop the presses! Texans force a turnover. Extra, extra, read all about it. Watt recovers fumble on Jaguars 4th and 1 wildcat run at the Texans 8!!!!! That's their first takeaway this season.

The Jags got immediately roasted over the terrible play.

Incredible play from the Jaguars there. An all-timer.

The Jags have no faith in their kicker who is 0-2, so the Jags did a direct snap to the RB on 4th down, and he was going to throw a pass in the red zone … and fumbled.

What on earth, Jaguars….4th and 1 in the red zone. They split Minshew wide. Direct snap to James Robinson. He slowly rolls out, attempts to throw, fumbles. Turnover.