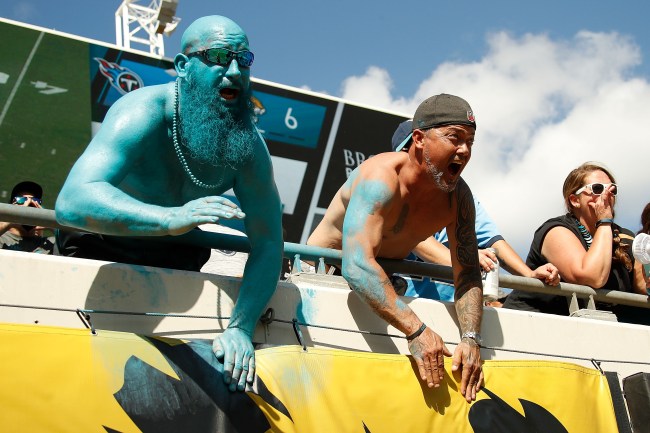 The Jacksonville Jaguars play in one of the hottest states in America, Florida. And, while I’ve never personally been to the city, I’ve heard that it can get pretty damn steamy in those parts, especially during the months of July through December when the NFL season’s going on. After doing some research online, it’s not just hot, it’s uncomfortable, with average temps in Jacksonville basically hovering around 90 degrees in July and August, and then mid-80s in September and October, before “getting cooler” with mid-70s come November and December. That sounds F’in miserable to sit in while watching an NFL game all season — and the team seems to agree.

That’s why the Jacksonville Jaguars have floated a pretty badass idea out there that would help give their fans in the stands a reprieve from that hot Florida sun; drones. No, seriously, the team’s actually considering using gigantic flying drones over the stadium to manipulate clouds in order to create shade. That’s kind of awesome, right?

According to Pro Football Talk, Jags owner Shad Khan mentioned a similar proposal for “artificial clouds” to be used over stadiums at the 2022 FIFA World Cup in Qatar — which would carry shades over stadium to present more shaded areas — and that it’s an idea that might just stick with his club. Take a look at the thought from the Jacksonville Jaguars owner, per ABC’s First Coast News.

“We want to look for creative solutions that are very cost-effective,” said Shad Khan Jaguars owner.

“It’s very futuristic but it could be very cost-effective only on the days you need it,” Khan said. “I don’t know how feasible it is, but as an engineer when I saw it I thought boy that would work very well for us. I think there are many, many creative solutions,” Khan said.

For those wondering how the hell this would all look, here’s a mockup video showing how the drones could work to help cover fans in the stadium, which was presented in the aforementioned proposal for the 2022 FIFA World Cup.

While the presentation looks good in a video, there’s no proof that the tactic is actually being used anywhere at the moment, which, obviously, could present a little problems as far as logistics and execution goes. But you have to admit that this idea is F’in awesome, and is something that the Jacksonville Jaguars should absolutely consider doing to help bring more fans to the stadium so not to avoid the heat by staying home to watch games instead.