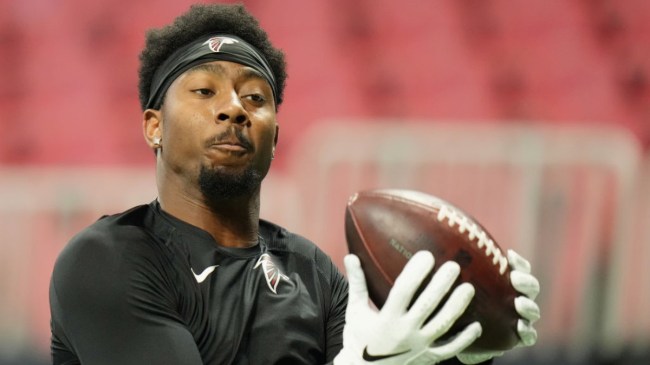 The NFL trade deadline has brought nonstop action for football fans. After a slow trickle of blockbuster deals leading up to today, the NFL collectively decided there needed to be more action on deadline day and a flurry of trades have ensued.

The Dolphins gave up a 1st round pick to land Bradley Chubb. The Bears finally got Justin Fields some help at wide receiver. The 49ers made another move at running back.

Even with all of these moves, the Jacksonville Jaguars managed to pull off the most shocking move of the day.

They traded for Calvin Ridley, who is currently serving an indefinite suspension for gambling on NFL games.

Shocker: The #Falcons are trading WR Calvin Ridley to the #Jaguars, sources say, in exchange for complex draft compensation that can be worth at maximum a 2023 5th rounder and a 2024 2nd rounder. Ridley is suspended through at least the 2022 season. pic.twitter.com/Zk6Yb7U5F3

The details of the deal are a little bit confusing with the actual draft picks they give up depending on a number of different factors.

I don’t think anybody was expecting to see Ridley traded today, but this is an absolute steal for the Jaguars. Many assume that Ridley will be back next season and if comes back at the same level he was playing 2 seasons ago, he’ll be worth way more than this trade package.

Ridley looked like he was ready to become a top 5 receiver in the league 2 seasons ago and we’ve seen that the price for one of those tends to be at least a 1st round pick. The Bears even just gave up a 2nd rounder for Chase Claypool and Ridley has proven much more than Claypool at the NFL level.

The Jaguars made the day’s most confusing trade, but there’s a good chance that we’ll be talking it about it as the best move of the day by this time next year.