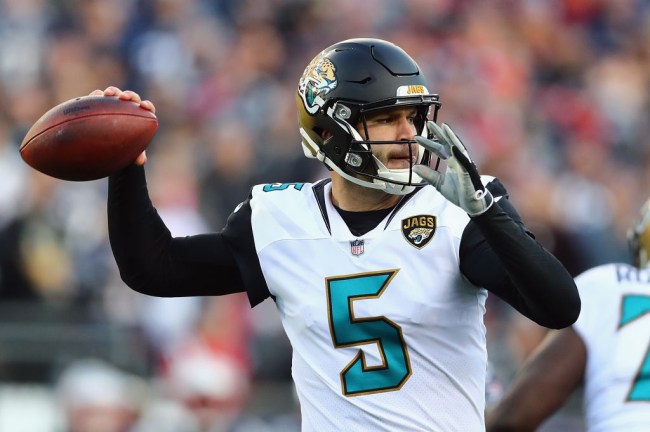 After wearing them for just five years, the Jacksonville Jaguars are ready to make a change to their uniforms.

The team announced a few weeks ago that they’ll be unveiling a new look for the 2018 season this upcoming April right before the NFL draft.

The Jaguars also confirmed today that the team will wear new uniforms and helmets for the upcoming 2018 season. The final design will be unveiled later this spring. As an added benefit, current US Assure Club and Suites season ticket holders and Fields Auto Group Terrace Suite season ticket holders will receive an authentic 2018 personalized Jaguars jersey when they renew their seats for next fall.

Images of the Jaguars’ rumored new uniforms apparently surfaced on Twitter over the weekend.

Leaked image appears to confirm rumors of what new uniforms will look like https://t.co/wAdPnhu2Db #DTWD pic.twitter.com/8DOsY4bDUe

Rumor spreading around Twitter that this is what our new uniform will look like https://t.co/RJnQ3ZKzMo #DTWD pic.twitter.com/nrLbCXDhf4

The biggest difference is the absence of two-tone gold and matte black helmet design which was reported last month by AP reporter Mark Long.

Say goodbye to this piece of (art). The Pro Bowl will be the final game for Jaguars in the widely mocked, two-tone helmet pic.twitter.com/4C3p2awA2Z

It seems like the Jaguars are listening to fans who hated the previous iteration of the helmets and love the teal uniforms. We’ll have to wait until April to see what the Jaguars officially have in store for their new uniforms.